While I was in Nepal I was always planning our day. I really didn’t want to spend our free days (whatever was left after all our lunch and dinner invites from our relatives) staying home. My MIL even told me once; I probably have chakras on my feet because of which I can’t stay in one place for long. I am sure that is true and I have even admitted that in my post here. 🙂

One of the days, I, with my MIL, FIL and AS, went to Kailashnath Mahadev which is a Shiva statue situated in Sanga, the border of Bhaktapur and Kavrepalanchok districts in Nepal. It is is spread in 400,000 sq feet area and houses a 16 delux room resort, spa, yoga, health club and meditation centre.

This is the World’s tallest Lord Shiva statue till date, standing 143 feet high. It depicts Lord Shiva with a Trishul in his hand while a king Cobra is resting on his shoulder.  The construction for this gigantic statue started in 2004 and completed in 2012.  It was inaugurated by Nepal’s President Ram Baran Yadav on June 21 2012.

The statue has been made of copper, cement, zinc and steel. The place also has a children’s park, physiotherapy clinic, steam and sauna bath facilities.

To make this statue cope with landslides and other natural incidents, there was a 100 feet foundation which had to be constructed as it is situated on a hillside, there were also many other precautions which needed to be considered.

There seems to be two entries to the area. The first one which is the main gate is the entry to the resort, physiotherapy clinic, steam and sauna bath facilities and costs Rs. 100 to get in and it includes entry to where the statue is also. The second is and entry to only the statue and costs Rs 25 or maybe even free, depending on who you ask. My brother and parents had been to the temple before so had warned us not to pay the Rs. 100 entry fee, i.e.  don’t go from the main entry, as we were not interested in the resort and all. But somehow we end up going through the same entrance as them where we have to pay RS 100 a person to get in, this is I believe since the motorable road leads to the entrance. It was not a lot of money but considering that you can enter for free, it is a bit stupid to pay money especially if you don’t intend to avail of the other facilities in the resort/ clinic.

Once we parked our car, the only thing, I could think of was food so we decided to go and eat at one of the canteens they have. They serve only vegetarian food which was a big letdown for AS. We ordered Puri tarkari, veg momo and chowmein. It was nice but I have to admit it was really pricy for the place. All the items were RS 200 but we get RS 100 discount if we show our entry ticket. I know it was all business and we are one of their millions visitors who fell straight into the trap. I am calling this a trap because, just 500 meter away from that canteen there is another canteen near the entrance for the statue (yes the free one) and they are selling everything for less that RS 100.

Anyway after enjoying the food we went to visit the temple. As I had seen the photo before, I knew what to expect but still it was really great feeling to see the idol from up-close. We took lots of nice photos and walked down to the main entrance. 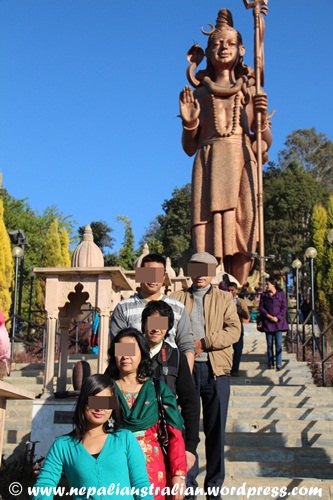 There were lots of people there mainly Nepali but there were a few tourists as well. Being the world’s tallest statue of Hindu God Shiva, Kailashnath Mahadev Statue has become a famous tourist attraction in Nepal and is visited by thousands of tourists from across the globe. 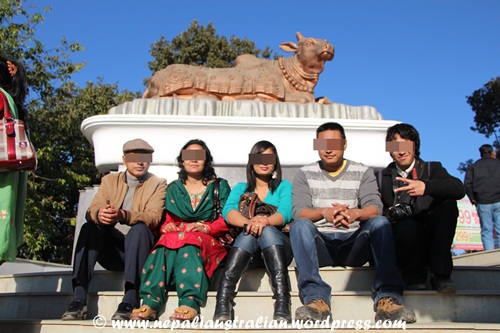 My BIL was having his Rotaract District Conference, in the resort there so when he was done, he also joined us at the statue. It was a nice family get away for us so close to Kathmandu.