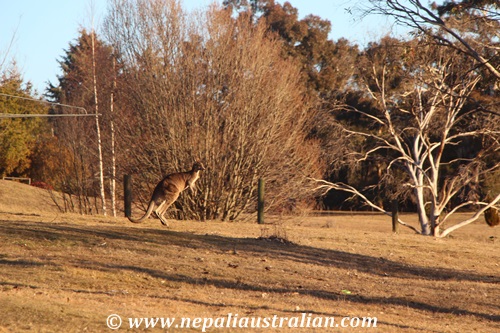 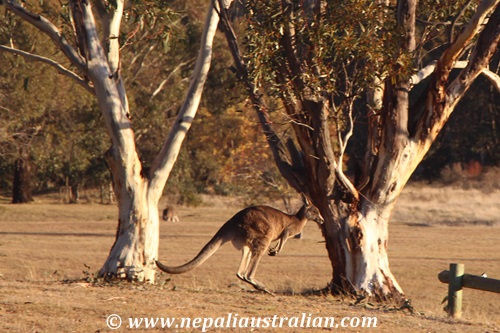 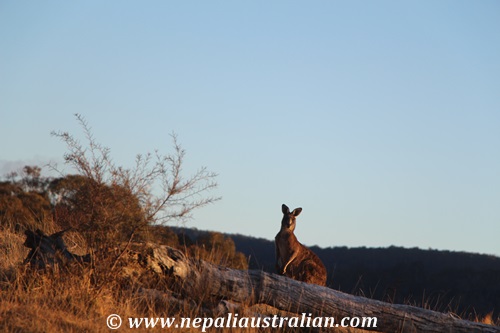 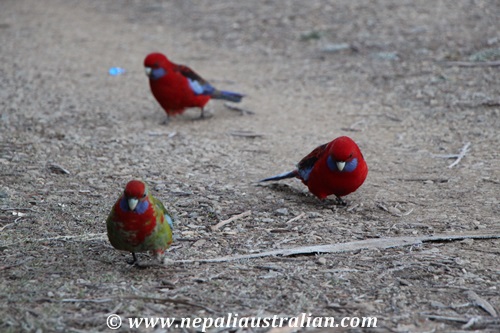 Nirbuni for my nephew (second birthday)

I swear it feels like yesterday that I told you I had a new man in my life (my li’l nephew) and gosh it has been two years now. Even though he was born in 18 July, we celebrated his birthday on 26th of July which was determined by his birth chart and our own Nepali calendar.

Since his birth, he has given joy to everyone including his parents, us, my parents and my sister in law’s parents. When he was visiting last month to Nepal, he was the apple of the eye and was spoiled rotten by everyone.

Strangely, for reasons unknown and out of traditions handed down from generation to generation, the first birthday of a child is not celebrated by Newars. When a child is born, he will have chhaiti, nawaran then pasni. After pasni, the big celebration is second birthday, which is known as Nirbuni in Newari.

According to tradition, we make Yomari every even birthday (2, 4, 6, 8, 12) until a child turns 12. Yomari is a delicacy of the Newars. It consists of an external covering of rice-flour and an inner content of sweet substances such as chaku (Molasses). 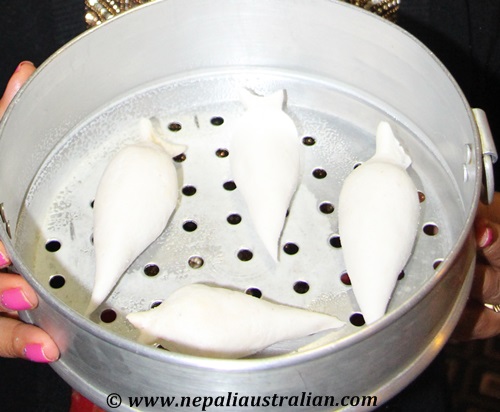 During Nirbuni, a big puja is performed and the child is given a garland made out of two yomaris. The child is also given tika and sagun and prayed to ward off evil spirits from the child’s body. If we were in Nepal, relatives would come along with gifts and sweets for the kid. Therefore, this birthday was a big deal for us.

We started Saturday making yomari and sagun. With the help of our cousin it was done and then the puja started. My nephew was good during the puja as he sat on his dad’s lap while I perform the puja.

I am not expert on performing the puja but this is what I did. 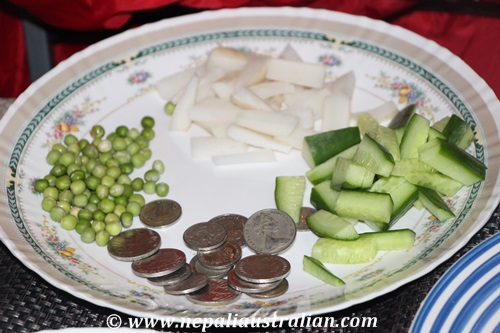 My parents and my SIL’s parents were on skype watching the ceremony. They were happy to watch all the ceremony even though they are so far away.

I also took tray of fruits, biscuits and a three piece suit for him as a birthday gift.

He looked really adorable in the suit.

Then there was a party in the evening. I did the decoration and was happy with the result. It was a fun party with lots of kids.

The house was chaotic in a good way for the rest of the evening where kids ran, laughed , danced and played. 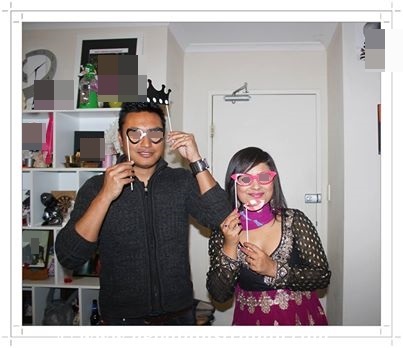 We had a nice cake for him and the food was catered so everyone enjoyed the day. It was such a fun day and the little man was very happy with all the attention and gifts.

On Sunday, I baked cupcakes for him to take to his childcare to celebrate his birthday. The childcare request simple individual cupcakes so I baked them myself.

Overall, it was a great nirbuni celebration for my nephew.

Wishing little man all the happiness of this world.

Another of my post is published in The Himalayan Times , one of the leading daily papers in Nepal.

I am honoured and happy to be a part of the paper again.

It was published in 24 July 2014 under Blog Surf section. If you are in Kathmandu, get the paper and find me on page 8 and for those who can’t, here is how it looked :). 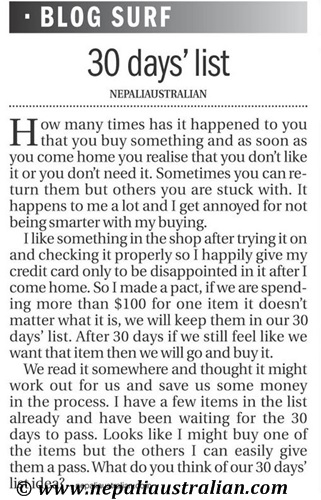 And here is the link to their epaper.

I know I keep on writing that it is so cold here and I hate winter. The only perk during winter is that we can drive a few hours (5 hours) out of Sydney and have some fun in the white snowy wonderland. I had been to the Snowy Mountains two years ago and it was great fun so it was time to do it again.

This time we went with another couple. It was a long drive after work on Friday but it was worth the trip when we were on the mountain to snowboard early next morning. First we went to the ski hire shop to pick our boots and snowboards and headed to the mountain. 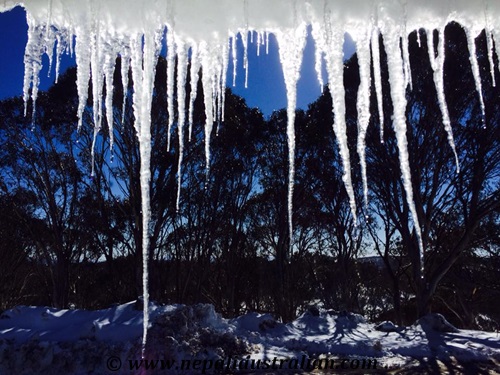 Selwyn Snowfields is a small, family-friendly snow resort located in the northern section of Kosciuszko National Park; just west of Kiandra. The scenery as you drive towards the Mountain snowfields is spectacular. Trees, rivers and lakes give way to snow covered mountains and the whole incredible scene is punctuated only by the winding sable coloured road on which you drive.

We were there by 9am but the place was already full with excited families and kids enjoying the sunny day and lots of snowfall. After parking in the nearby car park, we went to buy the lesson and lift pass and it was time for the real deal. I have skied before but never snowboard so both AS, me and my friend was getting a two-hour lesson first then we were on our own for the weekend :).

I was slightly nervous because I remember falling so many times when I tried to ski the last time. I was sure snowboarding was not goona be any easier. But looking at small kids easily going around in snowboards gave me some hope.

The lesson is supposed to teach us the basics, and that was essential. The class started in the flat surface with the instructor teaching us how to slide using only one foot. It looked easy but it was seriously hard and in 30 minutes I was so tired and exhausted, I was ready to give up. AS was constantly encouraging me but I was so hot and tired by then that I was thinking why I was punishing myself.

I had serious troubles skating i.e. moving with one foot detached. That is tricky to learn, and because I was tired, I started to get annoyed but was not giving up just yet.

After the initial practice, we were taken to the slope where we strapped both the feet. I struggle to stand for a while with both feet strapped but finally learned to do it and then I struggled to learn how to shift my weight properly in order to steer. 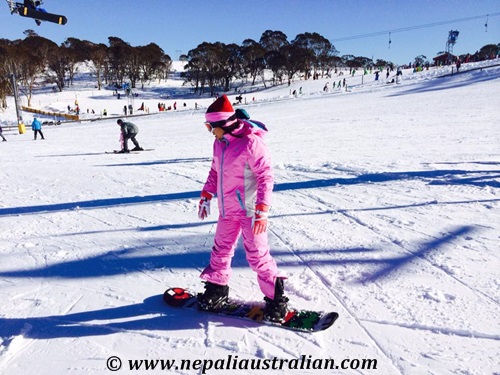 Finally, I could stand and slide on the slope but I had no control of stopping. I was falling down every time I wanted to stop. Lucky no bones were hurt during the process. I was so happy when I could snowboard even for short distance as it made me feel excited to try more.

By then two hours of the lesson was over so the instructor asked us to keep practicing, and he left.

As all of us were tired by then we decided to have a break. We had our lunch at the cafe besides the main slope. We were starving by that time and two hours of snowboarding was really a great workout. We settled for chicken sandwiches and a big box of wedges.

Then we headed onto the slopes again.

This time I was happy going on the slope even though steering ability was not good and it was tricky at times trying to avoid collisions with other adults and kids. I fell hundreds of time during the whole process but still both AS and I thoroughly enjoyed our snowboarding experience. 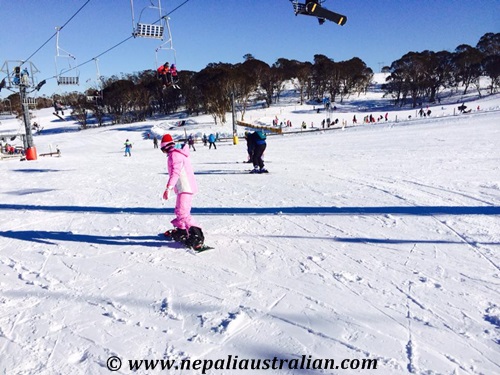 The afternoon sun was melting the snow and it was slightly windy by the end of the day so we decided to call it a day and head towards our hotel for a bit of rest. I felt really good when I took out my snow boots and relaxed in the car. 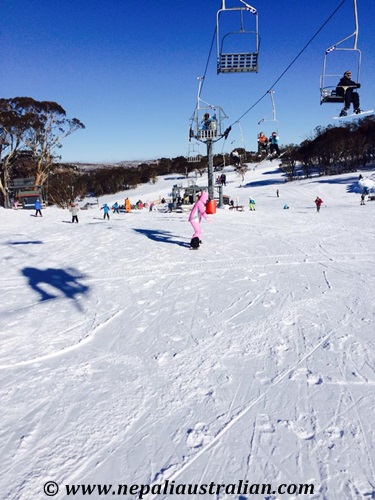 For the next few days, every muscle in my body ached but I highly recommend the experience and we will be doing it again when we go to snow next time.

Do you snowboard? Do share your tips and tricks for novice snowboarders.

Sometimes it is easy to ignore what you have and to appreciate how good you have it. That is the case for me when I sometimes forget that I live in one of the best countries in the world in terms of economy and safety. We also have many nice people around us. From time to time things happen that reminds me the very thing.

Last week AS forgot his bag on a bus coming back from work. He didn’t realise that it was missing until he was almost home. He was reading on his tablet when this happened so it took a while to realise.

Anyway he came home and told me. We went through what he had in his bag: work pass (important), lunch boxes, sunniness and some odds and ends. Basically everything in the bag was easily replaceable but still because it was his bag, he felt a bit bad. We googled and found the lost and found number for the bus company but unfortunately it was closed for the day.

The next day, AS called the number and reported that he had forgotten the bag in the bus. The woman on the other side took his details and promised to call back if anything turned up. Lucky for us, she called him a few hours later and told him that they have the bag in the depot.

How great is that? We had almost given up hope because it is a normal bag with ordinary items which anyone could have picked up and taken with them. So AS went to pick up the back this morning and everything was there. This definitely made us appreciated that people are pretty honest and do not to take others’ belongings.

In a a similar incident a few years ago my brother left his phone on the train while on the way to work. He didn’t realise that it was missing for a while. In the mean time, I got a call at home from his number. The person told me that they had found the phone on the train and dialled the number called home to see if they could return it.

I told her it was my brother’s phone and he will come and pick it up as soon as possible. She left her mobile number in case my brother’s phone died. The next day, my brother picked the phone up and thanked the kind woman. Incidents like this make you believe in good Samaritans and good deeds.