Last Saturday, we decided to take a day trip to Blue Mountains and we had an awesome time. I went there with my husband, my brother and his wife, my cousin, her husband and her 4 years old son and a friend of mine with his wife.

Blue Mountains are around two hours drive from Sydney and it is one of the popular tourist destinations. It is one of those destinations where you can drive from point to point in a car stopping at different view points for stunning views or you can bush walk for hours to get from one great location to another. The roads are also very scenic.

One of the visitors we met there asked me if I knew why Blue Mountain is called Blue Mountains so I did my research and here is the explanation.

The mountains in the Blue Mountains look blue and their blueness comes from the way that the light hits the mist which rises from the eucalyptus trees which cover almost every inch of them.

On the way to Blue Mountains, there are lots of ice parks, lakes and falls. One of them is Wentworth Falls. When we got to Wentworth Falls, we were hungry so we decide to take a break in Wentworth Falls Park before bush walking. We ate our nice homemade lunch and went to the Conservation Hut to start our bush walking. 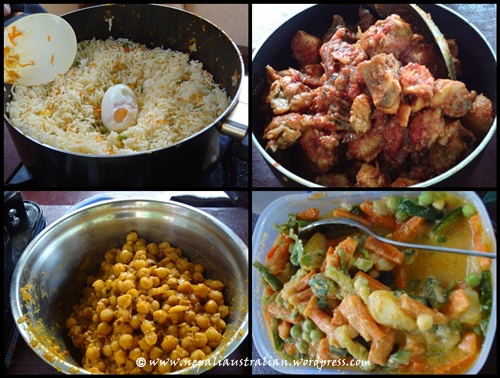 The track signs said an hour for the trip but I guess we took longer as we took lots of photos on the way. The walking tracks were really well maintained so even my 4 year old nephew easily walked without any help. We saw some amazing views on the way to the fall. Along with spectacular views, we saw kookaburras, parrots, lizards, spiders and colourful songbirds.

Once we were at the bottom of the waterfall it looked just beautiful. It looked like it came out of the National Geographic Channel. It was so cool and refreshing. There were lots of tourists enjoying the view.

After resting for a while, we made our way back to the car and went to see the mountains. The most famous piece of the Blue Mountains can be found in Katoomba as Echo Point. When Oprah was here shooting her final shows, it was one of the place she visited.

As the day was sunny, we had a great time going around the lookouts and taking some really nice shot. The Three Sisters looked beautiful from the view point but for those of you who love walking, you can actually hike down to the base of one for a dizzyingly spectacular perspective.

Ever time I visited Blue Mountains before, I took the Scenic tour which consists of

It is a must do if anyone is going to Blue Mountains for the first time. This time we skipped it and decided to walk most of the places. 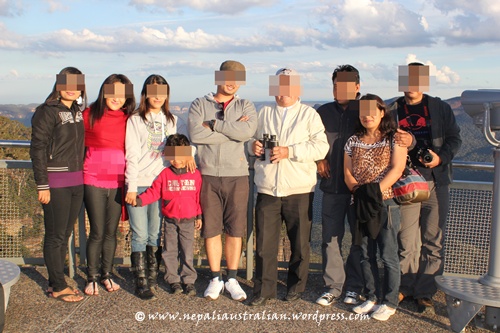 How to pronounce in Nepal Bhasa

How to pronounce in Nepal Bhasa 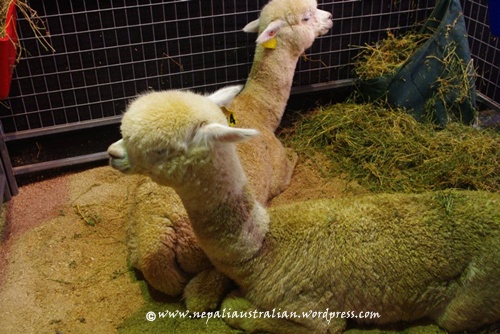 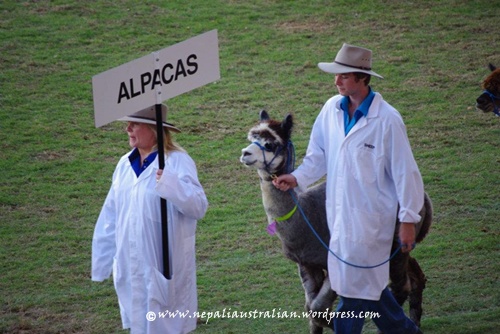 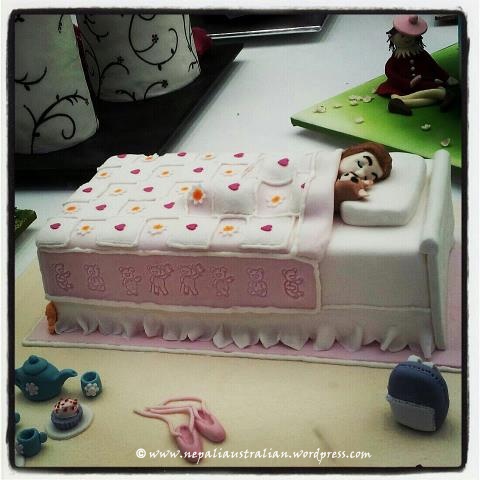 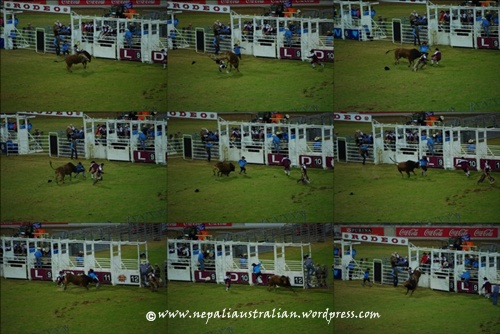 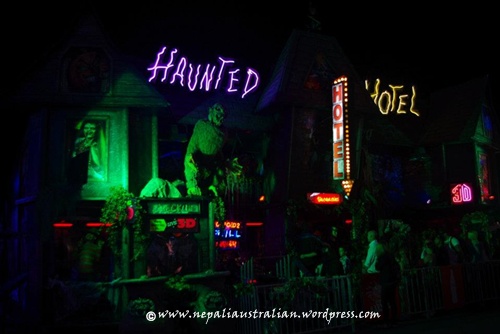 As I mentioned on my previous post, this year was my first Mother’s Day after my wedding. In my culture, you have to make the event special as it will be the first time a married daughter brings food and gifts for her mother from her home (husband’s home). If I was in Nepal, I would need to do all the preparation and make sure my mum had a great day but as I am so far away, my mother in law made sure that the ritual was done properly.

I am so happy that my in laws, mostly my MIL, made such a great effort to make sure my mum’s day was special. She did all the shopping and all the preparations and my FIL helped her a lot. Then my two BILs went and presented the foods and gifts to my mother. They also took these photos for us to see. I am so grateful and thankful for my new family for taking care of this and making sure things went great.

Have a look at the photos below and you can see traditional Newari Mother’s Day celebration. There are Sagun (egg, bara, whisky, fish, yoghurt and meat), also lots of fruits and rotis. It lookes so yummy. My mum also got a sari, a cake and masala. I really wish I could have been there to help prepare for it and to see the smile on my mum’s face. 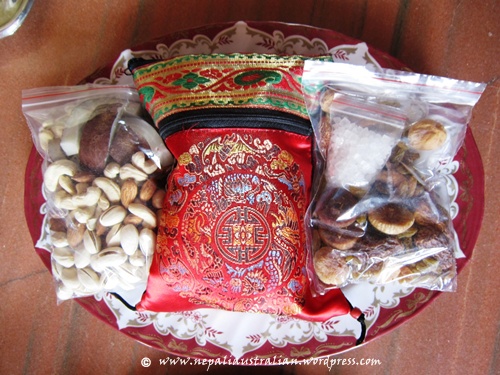 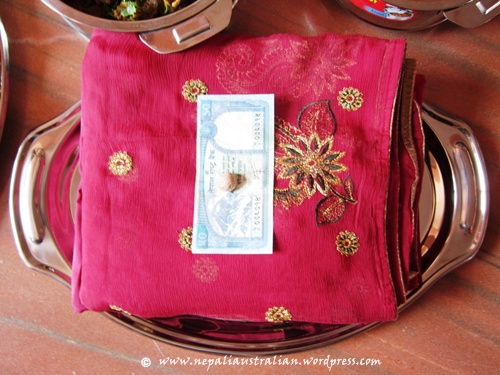 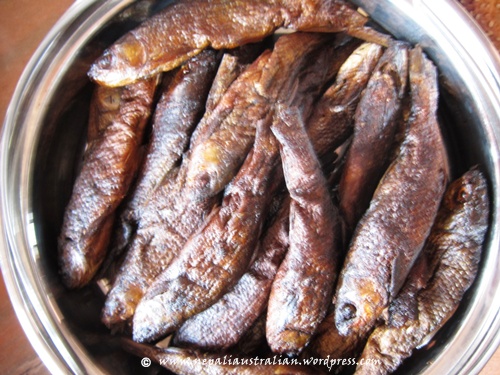 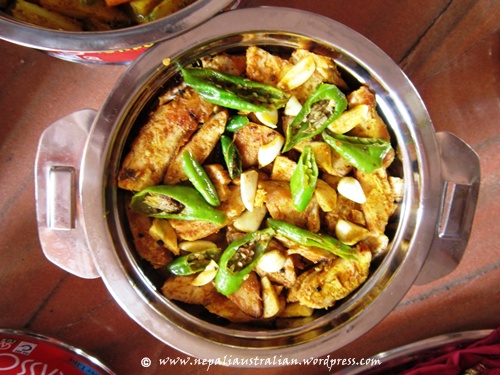 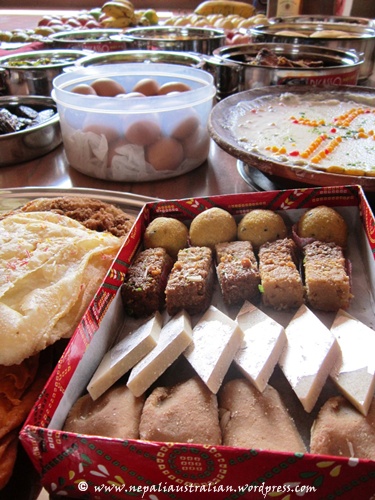 Nepal Bhasa, also known as Newari, is a language spoken as a mother tongue by Newars of Kathmandu Valley.

It was the language I leant from my grand mother while growing up but after she passed away I didn’t feel like speaking in Newari with anyone as it always reminded me of her.

I am not very good at this language as I haven’t had any practice in it for a while. AS wanted to learn this language as he doesn’t know this even though he is a Newar too. So I am making an effort here to put a few Newari language stuff for anyone who is interested in it. Please feel free to correct me if you find anything wrong. I really appreciate corrections and suggestions for this page. 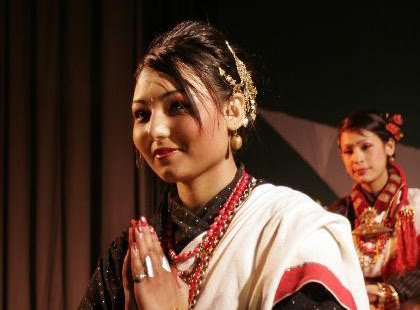