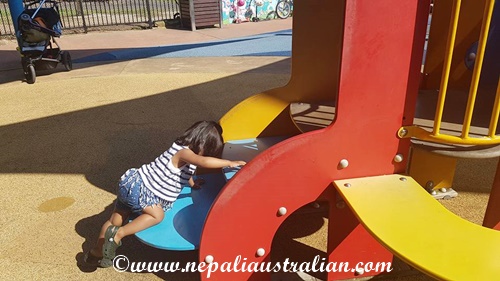 I mostly feel that Chhori is very small and forget that she already knows so much. She surprised us when she stared to join our conversations. Whenever AS or I ask a question to each other, if she knows the answer, she will say it. Sometimes it has caught us off guard but we love it as it beings a smile to both of our faces.

Lately we are giving her a lot less screen time so she can play with her toys and be active more. It is working well except that sometimes she will say “TV please mama”.  I see her pretend play with her cars, teddies and dolls. It is so interesting and surprising at the same time as she repeats things that we say to her like ” No baby ” or ” Eat more please” etc.

Yesterday, both AS and I were on our phones updating our grocery list and Chhori was dancing to one of her rhymes and suddenly she came to us and said “No phone mama”. I didn’t quite get it at first but when she said it again, I did and put my phone down. Then she went to AS and said, “No phone papa.” He obliged and she instructed both of us to stand up and start dancing with her.

Both of us could not help but laugh as that is what we usually tell her and now she was reminding us of that.

I am loving being a parent to this smart little cutie pie.

Do share any unexpected conversation by your kids. I am sure there are some fun and embarrassing ones too.

Posted in General, Our daughter

I am sure I am not alone in this boat. There are days/ week where you feel down and don’t want to do anything, meet anyone and feel as if your life is going nowhere. You just see everything around you and nothing is going according to your plan.

I am having one of those days and I feel like I need to jerking myself out of it and tell myself that I have many blessing to count and I should not waste time thinking about nonsense.

So that is what I am doing right now. 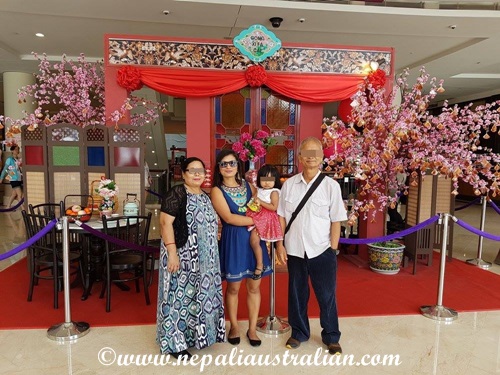 Writing this is already making me feel better.

Chhori : growing up too fast

I can’t believe how quick kids grow up. I believe it now when people say that all you need to do is have kids and they will grow up; you don’t even remember how time flies by.

Chhori is 16 months now and she constantly manages to surprise us.

These days, she wants to eat her own meal. So she sits in her chair, she can strap herself in if she wants to and then waits for the tray to be put on the chair. Then she patiently waits for her food. Once the food is on the tray, she wants a fork and she feeds herself. It is so cute to watch her eat.

I have to admit, she might grow up to be a patient one unlike her mum. It sometimes takes her few attempts to get her food on the fork but she is very persistent and keeps going until she has them on her fork. There were times when she got frustrated and threw her fork but she is getting better at it. She loves her independence.

It is easier for us as well. If there is food she can eat using a fork, like meat, pasta, noodles, veggies, fruits, we cut them into small pieces and give it to her and she will eat it all. Of course, she makes a mess as well but it is all a learning process.

I still haven’t given her rice and lito as she is not very good with a spoon and only 50% goes into her mouth. So that will be our next goal once she masters the fork. But we still are quite proud parents.

She also managed to surprise me with her dancing. From very early on she has managed to copy the actions from the rhymes on Youtube but this one was very special. I didn’t know that AS was teaching her but he asked me to come to the living area on the weekend.

So when I got there, AS asked Chhori to bring a teddy bear. She got a big pink one and AS started to sing the rhyme “Teddy bear teddy bear turn around” doing the action with the teddy bear. I was pleasantly surprised when Chhori joined and did all the right moves with the rhymes. So the rhyme goes like this

Chhori was doing all the right action and the best and cutest part was when she was turning around, doing the full circle. She is doing it so well and I am so happy to watch. This father-daughter team means a world to me for sure.

I am sure every kid goes through this phase and every parent has these happy moments. Please share yours and let me know what I can look forward to :).

Have a good day everyone and take care.

I find that eating healthy is not easy, especially if you snack a lot. I try my best to eat healthy meals and I am happy with that part but when it is the time for a snack, I eat whenever is available which means chocolate, cheese sandwich, biscuits and chips are on the menu too. Of course, everything in moderation is OK but sometimes I know I can go overboard.

Normally, I snack on fruits and dark chocolate at work so I don’t jump to eat other unhealthy options but it gets boring at times.

I am so happy that I have recently re-discovered Roasted Chickpeas. There are many varieties of chickpeas and most common ones are beige, black, green, red and brown. They are all tasty and healthy at the same time. 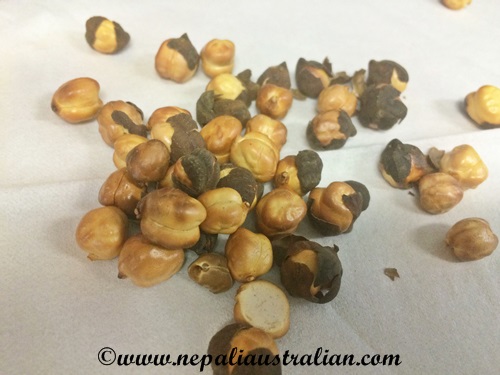 According to experts, they add a low-fat boost of nutrition that supports healthy weight loss. If you Google them, you can find different ways to eat them but I just want to consume the roasted ones right now.

What healthy snack are you munching on? Do share some ideas.

I told wrote a while ago that Chhori was flying for the first time. So here is how her first flying experience went.

We went to the Gold Coast for a holiday which is about an hour’s flight from Sydney. We were at the airport 2 hours before the flight and checked in our luggage and went straight to the gate. At this stage, we had an hour to kill before would we board the plane.

Chhori was OK until we were at the waiting area. As soon as we chose to sit down, she decided that she wanted to walk around and make new friends.

Either I or AS was always behind her when she started her adventure. She would just walk around and find a group of people and start interacting.

Once, as I was walking behind her, she decided to stop next to 3 ladies who were standing and talking. She just stood next to them and just looked at them and smiled. She behaved as if she knew them. They were super sweet when I apologised and even talked to her for a while. Then suddenly without any reason Chhori decided to move on to another place. 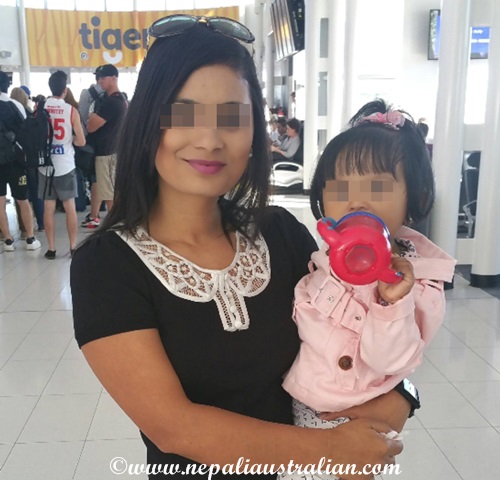 This time she found a family with 3 kids siting in the lounge area. The youngest boy was almost the age of Chhori and very shy. The girl who was around 5 years was so into Chhori that she would constantly hug her and touch her despite her mum telling her not to. It was amazing to see how kids make friends so easily. She had fun with this family for a while then she decided that she was done and moved on.

Next stop was a woman who was on her own but was eating something. Chhori was too curious and went next to her and just stared at her. I apologised to the woman and tried to move Chhori away but she didn’t want to. So I had to give her biscuits to distract so she didn’t bother the poor lady.

Apart from these interactions, she was smiling at everyone and was very curious about everything. She made both AS and me tried by the time it was time to board the flight. 10 minutes before the boarding time she decided she want to breastfeed and I thought that was a better idea than running behind her. So I started to breastfeed and 5 minutes into it she went to sleep. She was still asleep when we boarded the flight and even throughout the whole flight. Yes, she was sleeping until we landed in Gold Coast. I had to wake her up when we landed as it was getting difficult for me to get out of the seat.

She was fresh and happy and when we were outside the plane and started walking everywhere again. So on the flight there, AS and I were able to enjoy our meal and talk while she slept on my lap. I have to say it was not expected but definitely a welcome outcome.

But on the flight back to Sydney the story was completely different.

Chhori decided to go to sleep just after we checked in and was fast asleep for around one hour. Then, around 10 minutes before boarding she woke up.

To start with, once we were boarded and seated, she refused to put on her seat belt. All she wanted to do was stand and run around. She finally settled down when we took off. 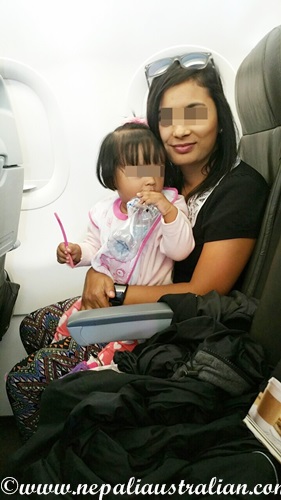 For the next 50 minutes I had to constantly talk with her or get AS involved and I was praying that she wouldn’t cry. I didn’t want everyone to stare at us the whole flight.

Luckily there were other babies on the flight and a few of them were crying from time to time.

Chhori did cry once when I refused to let her hold the hot tea but she was OK once we turned her tablet on. For the last 30 minutes of the flight she was watching her rhymes. 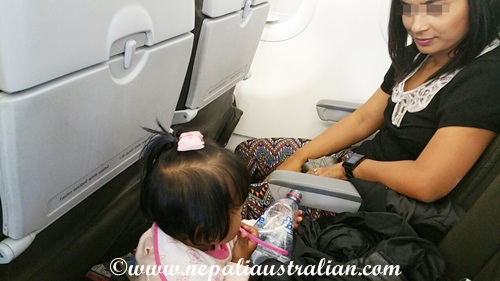 I had to constantly change the rhymes when she decided that she had enough of one but most of the time still she was OK. I was so happy when the pilot announced that we were going to land.

Chhori behaved normally on the flight and luckily for us we didn’t have any drama as it was a short flight.

We are going to New Zealand in August and the flight will be around 3 hours. I really hope she will be OK on that flight as well because that will be the test flight for our next travel which we are planning, to Nepal.

Please share your own adventures of flying with kids or your experience of having other’s kids on board. We are not going to judge you but hope to learn from your experience.

Posted in Australia, Being Mum, Holidays, Our daughter