I was excited when AS told me that he was taking me to Mysore which is 140 kms away from Bangalore, where, the grandeur and opulence of the erstwhile kingdom of the Wodeyars left a legacy that has made Mysore culturally extremely rich. Magnificent palaces, well laid out gardens, clean & broad avenues, imposing buildings and majestic temples all add up to make Mysore an interesting city.

The car came to pick us up early morning and we drove to Mysore.

The road from Bangalore to Mysore was pretty good, passing through highways and towns. I was looking out the window most of the time and it was a great experience watching people going to work, street vendors selling lots of food and lots of shops and markets everywhere.

Mysore Palace or the Mysore Maharaja Palace is located in the heart of the city. And its one of the largest palaces in the country, also known as Amba Vilas Palace, was the residence of the Wodeyar Maharaja’s of the Mysore state. 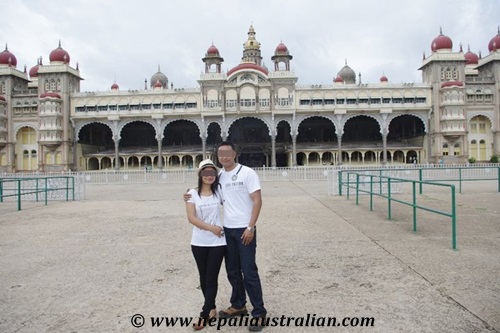 The original palace built of wood, got burnt down in 1897, during the wedding of Jayalakshammanni, the eldest daughter of Chamaraja Wodeyar and was rebuilt in 1912 at the cost of Rs. 42 lakhs. The present Palace was built in Indo-Saracenic style and blends together Hindu, Muslim, Rajput and Gothic styles of architecture. It is a three-storied stone structure, with marble domes and a 145 ft five-storied tower. Above the central arch is an impressive sculpture of Gajalakshmi, the goddess of wealth, prosperity, good luck and abundance with her elephants. The palace is surrounded by a large garden designed by the well-known British architect, Henry Irwin. The palace is a treasure house of exquisite carvings and works of art from all over the world. 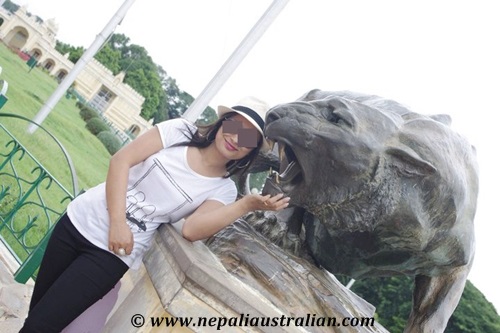 When we went inside the place I was in awe as it was so massive that I couldn’t imagine some people used to call this place their home. I could easily get lost in this big space with so many rooms and such wonderful decorations of exquisite carvings, paintings and works of art from all over the world.

While the palace can be photographed from outside, cameras are banned within the palace premises. They also ask to take off our shoes. We took the options of self-guided audio tours and there was so much information to take in.

Looking from one of the balcony on the palace, I was also amazed by the view where you can see the massive and beautiful garden and water fountains.

Once we were done with the palace, we went outside and explored the garden. There were many people but it didn’t deter us from taking heaps of photos outside the palace.

I was amazed to discover beautiful churches in India and one of them is St.Philomena’s Church, which was built in 1956 and is one of the largest churches in the country. Its inspiration is from Germany’s Cologne Cathedral.

The twin spires of the Cathedral, 175 feet in height, are seen from miles around making it a distinctive city landmark. The main hall of the cathedral can seat up to 800 people and is as exquisitely conceived as the ornately crafted exterior with beautiful stained glass windows depicting scenes from the birth of Christ, the Last Supper, the Crucifixion, the Resurrection and the Ascension of Christ.

When we entered the church, mass was in progress so we didn’t disturb and left quietly and instead went around outside the church, it was really beautiful.

The driver of the car seemed to know all the attractions in Mysore so he made sure we got to see all the major attractions. The next stop was Chamundi temple, which has always been patronised by the rulers of Mysore. In 1659 Dodda Devaraja Wodeyar built 1,000 steps and a huge Nandi, Lord Shiva’s Bull. This colossal Nandi is one of the largest in India, 16 ft. (4.8 meters) tall at the front and 25 ft. (7.5 meters) in length.

The magnificent pendent bells around its neck are exquisite. Nandi and the temple beside it are located at the 700th step of the Chamundi Hill. Krishnaraja Wodeyar III repaired the shrine in 1827 and built the present beautiful forty-meter seven storied Gopura (tower at the entrance) with gold finials and set up statues of his and his three queens.

As we were coming out, we saw a vendor who was selling idols of Hindu gods. I bought a few and I still have them in our puja area.

The architecture of Sri Renganathaswamy Temple follows the style of Hoysalas and Vijaynagara Empire. The main entrance is beautifully engraved with 24 forms of Lord Vishnu. 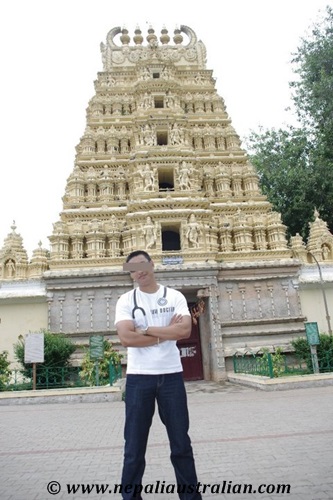 We also have similar temples in Sydney as well.

There is a sculpture of a couple of well-ornamented and majestic elephants standing guard at the entrance. As we enter the queue to get into the main temple, we noticed thee a Gold Plated Garudavahana and Nagashesha. The temple has several other deities including that of Lord Venkateshwara, Narasimha and Panchamukha Anjenaya.

I was a nice feeling visiting the temple and the place was well organised. 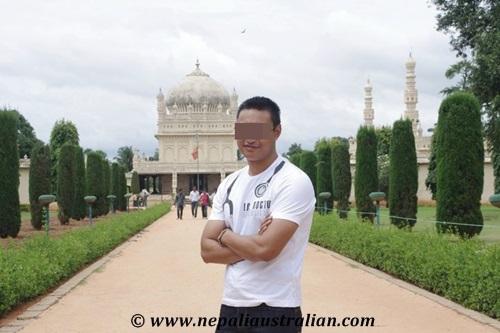 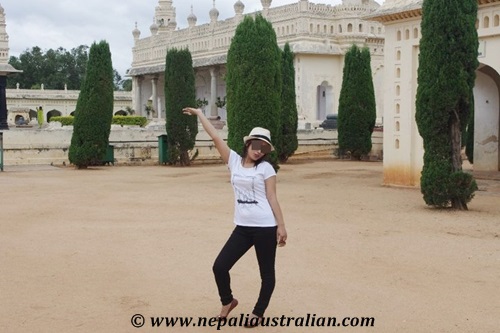 The inside of the dome is spectacularly decorated and the curators will turn the lights on for photographs for a small donation to the fund. The structure is very beautiful standing on a high and wide platform with an open verandah of polished pillars all round. The highlight of the Gumbaz structure are well shaped large dome, ivory inlaid doors, and carved stone windows of fine workmanship. The chamber is painted with the tiger stripes. 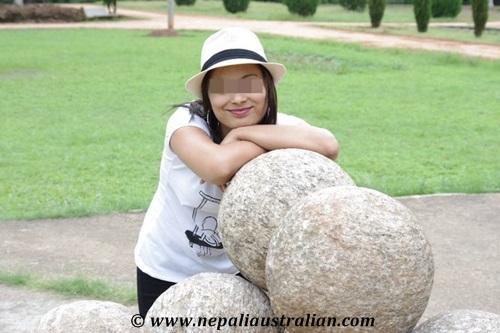 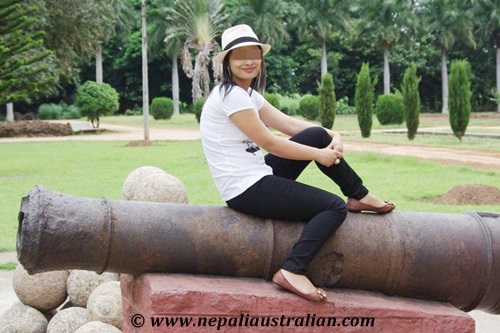 Adjacent to the tomb is the nearby mosque, still in operation, “Masjid-E-Aksa.” One can enter the mosque although it is necessary to cover your head. We decided against it as there were many people praying there.

Lalitha Mahal is the second largest palace in Mysore. It is located near the Chamundi Hills, east of the city of Mysore. We didn’t plan to visit this palace but our driver took us there as we had time and we are glad we did. 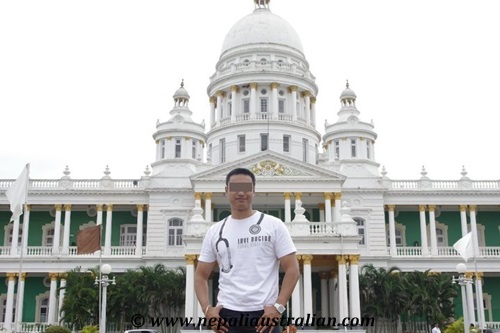 It was great place from inside and outside. Some part of the palace is converted into a hotel. For visitors it was restricted to just a few area of the huge mansion. We were informed that the palace was used in lots of movies as well.

I managed to take a pic one of the guard wearing traditional outfit. 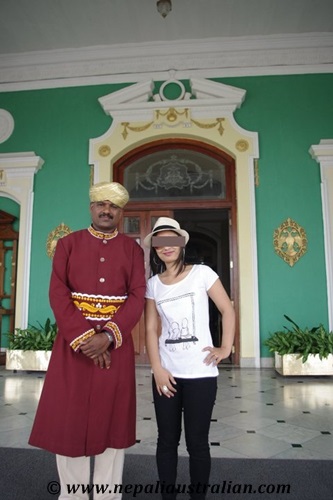 After our last stop, we headed back to Bangalore. One the way back we went to a Sari shop and bought Silk saris for my mum and MIL. They both loved it when we gave it to them.

The ride back felt very long as it rained and I couldn’t enjoy the view.

More in the next post. Till then take care everyone.