As always, no month passes in Nepal without a festival and today it is Ghoda Jatra (Festival of horses). 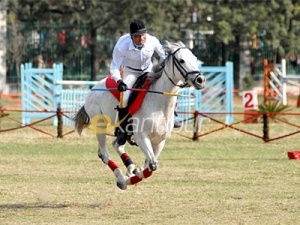 On this day there is a grand parade in Tundikhel, a large open ground in the middle of the city. It is believed that this festival began after the Kathmandu people buried a demon under the soil of Tundikhel show grounds. They say that he may rise again and cause terror in the world if he is not trampled on by horses each year. So every spring, this victory over evil is celebrated by organizing processions and grand display of show jumping, motorcycling feats, parachuting, aerobatics, bicycle races and gymnastics. The president, prime minister, ministers and other official along with, the Living Goddess Kumari, and thousands of people from all over the country observe this Jatra. 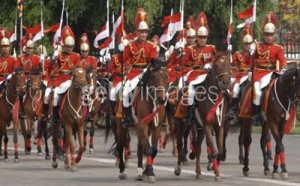 After this great function of horse ridding in Kathmandu, there is the Khat Jatra of the eight sister goddesses. The Newars of Kathmandu city observe this day as a family get together or ‘Pachare’. The chariot of Goddesses Lutidevi, Swetakali, Kankeshwori and Bhadrakali is brought to Ason, and the family get together of eight sister goddesses also takes place, as legend says. 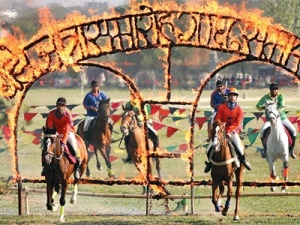 At Bal Kumari area, in Patan during Ghode Jatra festival, a horse is intoxicated with spirit and an equally drunk person in a traditional Newari attire rides it and the townspeople chase the intoxicated animal through the streets amidst much cheering and clapping. This race is thought to have been commenced in the olden times by a certain king of Patan to give a better show in comparison to Tundikhel’s parade, as in those days no one from Patan could attend the show in Kathmandu as it was a rival kingdom, a time when Kathmandu valley was divided into three kingdoms of Kathmandu, Patan and Bhaktapur.