I had this post sitting in my draft box for a while but the article I read in the dailymail online inspired me to finish and post it. Please click here if you want to read it too. 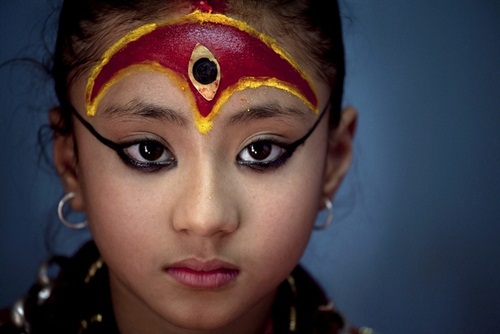 The word kumari literally means virgin in Nepali. Kumari is the only living Goddess in the world worshipped by Hindus and Buddhists in Nepal. The Living Goddesses are young pre-pubescent girls that are considered to be incarnations of the Hindu goddess of power, Kali and Goddess Taleju.

For over 300 years now, it is believed that the spirit of the goddess Taleju has been residing in a succession of pre-pubescent virgin girls in this way, and the future of the country has balanced precariously on their pleasure. With a frown they have held back the rains; a single tear from their eye has resulted in floods. An ancient ruler ofNepalis even said to have died after the reigning Kumari fell asleep during an audience with him. 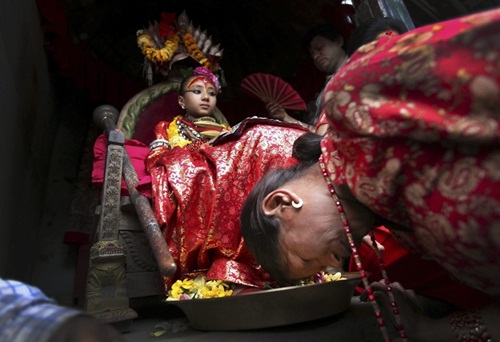 There are 10 Kumaris in Nepal but I have seen the ones from Kathmadu and Patan only. The Kumari from Kathmandu is considered the Royal Kumari and follows a bit different rules than the rest of the Kumaris. The Royal Kumari resides in Kumari Ghar in Kathmadu Durbar Square while the rest of the Kumaries live at home with their parents and family, and go to school as any other normal girl. They have certain ritual duties that they have to perform regularly, but otherwise live a pretty normal life.

How Kumari is chosen?

Young Buddhist girls from, Kathmandu’s Newar community, Shakya or Bajracharya are chosen as “living goddesses”.  Normally it is a privilege to have your daughter contest in this selection process.

These are some features a young girl should have to consider to be chosen as Kumari .

Above all, she should possess 32 lachchins (characteristics). She must have a sense of courage and should not fear a masked man or an animal sacrifice and she must never have lost a drop of blood. Her horoscope must match that of the king (it was so in the past, may be the President’s horoscope is considered now).

During the eighth day of Dashain, called Kal-ratri, the selection process of Kumari begins. The would be Kumari is left in a room with 108 decapitated buffalos laid out in a sea of blood with men wearing horrid masks dancing among them. This is to test the fearlessness of the girl. If the child gets scared and cries, she will be disqualified and the next girl has to go though the process until they find a girl who can smile in that surrounding and enjoy the dance of the masks men.

Every September, during the Indra Jatra festival, the living goddess in all her bejewelled splendor is borne in a palanquin in a religious procession through parts of Kathmandu. It is a grand festivel attended by people in the thousands, who come to see the living goddess and seek her blessings. In keeping with an old tradition, the Kumari also used to bless the King but now she bless the president and prime minister of the country.

Critics say that the tradition violates the child’s human rights and leaves her unprepared for life after retirement.

Here is a documentary by ABC Australia on Kumari.

I’ll let you decide what you want to believe in but for people of Nepal, Kumari is still a Goddess who they respect and bow to. Kumari is the faith of Nepal and they still believe that she is an incarnations of the Hindu goddess of power.

Today, in the name of modernity, some members of the human rights groups along with the government are proposing that the Kumari tradition be abolished for good. Personally, I think Nepal should learn how to make its culture rich and safe instead of abolishing it, because it is centuries long tradition and this need to be kept alive for the future generation so they can learn and know more about it. Seeing the European countries spending millions to preserve their history and culture, it will be sad to see this tradition stopped.

This entry was posted in Nepal, Newari Culture and tagged Controversy regarding Kumari, goddess taleju, History behind Kumari, How Kumari is chosen, human-rights, kumari, living goddess, religion, The Kumari Festival. Bookmark the permalink.

14 responses to “Kumari – The living Goddess”