We went to St Peter’s Basilica on Vatican city tour.  One must wear proper cloth that covers shoulders and legs in order to go into the Basilica. 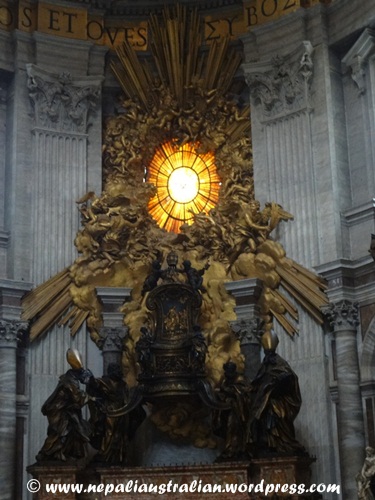 St Peter’s Basilica is the largest Christian church in the world. It is the symbolic “Mother church” of the Catholic Church and is regarded as one of the holiest Christian sites. 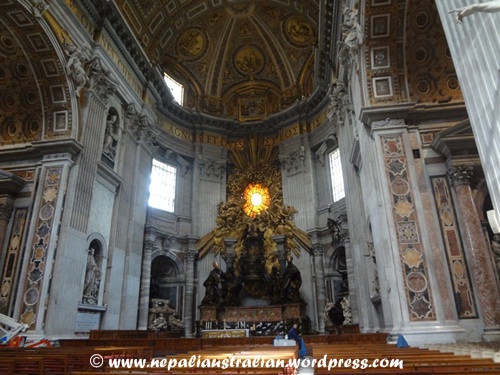 Stepping inside St. Peter’s Basilica, you can see and feel the grandness of the church.  The place is so huge and beautiful that it must have cost a fortune to construct something so amazing. The church roof was really high and the letters on the wall just below the roof were actually over 6 feet tall even though they looked so small from the floor of the church. We could see people on the gallery near the roof and they were the same size as the letters.

The big altar, the decorated ceilings, the sun shining through the stained glass windows of the basilica were just awesome and the main altar was about 10 stories high. The details on every pole were just awesome and we could have easily spent hours admiring the work of great architects and sculptures. The natural light coming from above illuminates the church and spreads subdued radiance all around.

The Papal Altar and rising above it is the Baldacchino

The whole church is filled with renaissance monuments, statues, trimmings, and sculptures in meticulous motifs/details and maintained in utmost attention. In there, we also saw the famous Renaissance masterpiece that was sculpted by Michelangelo called Pietà. 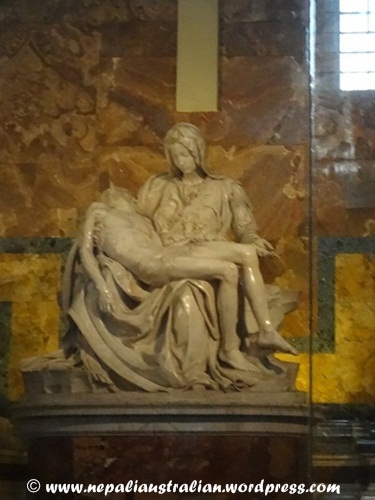 The structure is pyramidal, and the vertex coincides with Virgin Mary’s head. The statue widens progressively down the drapery of Mary’s dress, to the base, the rock of Golgotha. The figures are quite out of proportion, owing to the difficulty of depicting a fully grown man cradled full-length in a woman’s lap. Much of Mary’s body is concealed by her monumental drapery, and the relationship of the figures appears quite natural. Michelangelo’s interpretation of the Pieta was far different from those previously created by other artists, as he sculpted a young and beautiful Mary rather than an older woman around 50 years of age.

Here is an interesting story behind the Pieta.

Created by Michelangelo before he was famous, Michelangelo never put his name on his works.  No matter what the work is, you can’t find his name anywhere.  There is an exception, of course.  Shortly after Michelangelo made it, another sculptor of the time began to claim that the Pieta was his work.  This was of course quickly disproven, but Michelangelo got fed up with it.  He snuck into St. Peter’s late one night, and carved this across the sash running across Mary’s breast:  MICHAELA[N]GELUS BONAROTUS FLORENTIN[US] FACIEBA[T] (Michelangelo Buonarroti, Florentine, made it).  There is one more important piece of information about the Pieta.

Next was the chapel of the tomb of Pope John Paul II, whose remains were placed beneath the altar.

We also saw a statue of St. Peter with the foot extremely worn down from all of the people touching it. It is believed that if you touch his foot, your wishes will be fulfilled. 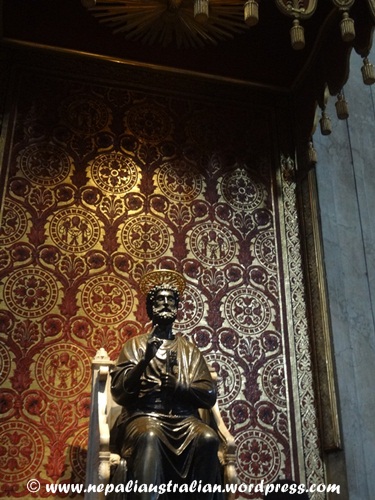 The bronze statue of Saint Peter

We also had a chance to go down the grottoes, beneath the basilica, where there are many tombs. Although surrounded by tombs, it did not have an eerie feeling.

Here are few photos from the Basilica. Even though our guide told us what each of the statues and altars were about, I couldn’t recall them when I looked at the photos after coming back to Australia. Thanks to internet, I managed to identify most of them. 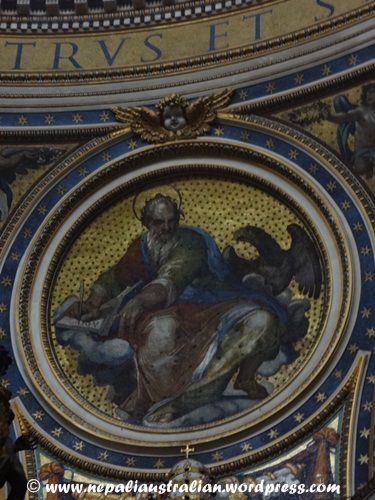 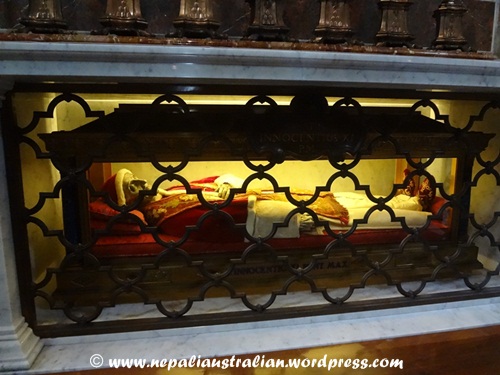