Last weekend, we went to visit a hidden treasure of Sydney, in the middle of the city in Darling Harbour.

Initiated by the local Chinese community to share their rich cultural heritage and celebrate Australia’s 1988 Bicentenary, the Chinese Garden is the result of a close bond of friendship and cooperation between the sister cities of Sydney and Guangzhou in Guangdong Province, China. The Chinese Garden of Friendship was designed by Sydney’s Chinese sister city, Guangzhou. 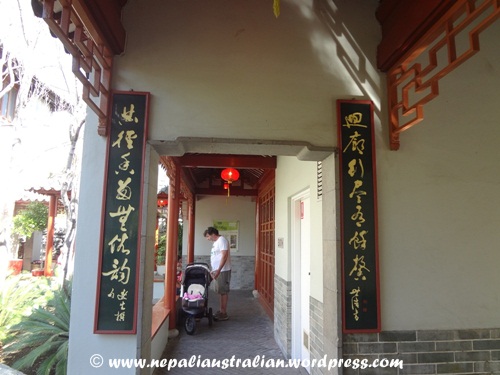 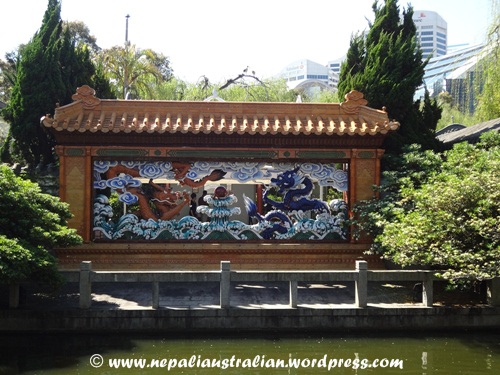 Even though I have been living in Australia for so long I have never been inside the Chinese garden. I have walked past the garden numerous times but for some reason never thought to go inside. Last weekend the weather was so good that I and my husband decided that we must go out and enjoy the sunny day. So we took a train to the city and walked to Darling Harbour from Town Hall train station.

We were in the garden by 11am and there were only 3 people on the queue to get tickets to go inside. We got the ticket and it cost us just $6.00. We started our tour from the right hand side door of the garden.

The whole garden cannot be seen from any one point within the garden. It has a number of features including the Dragon Wall symbolizing the bond between New South Wales and Guangzhou, the Water Pavilion of Lotus Fragrance, the Twin Pavilion and The Tea House that offers traditional Chinese tea and other refreshments. The garden is a popular venue for weddings, providing many beautiful backgrounds for photographs. 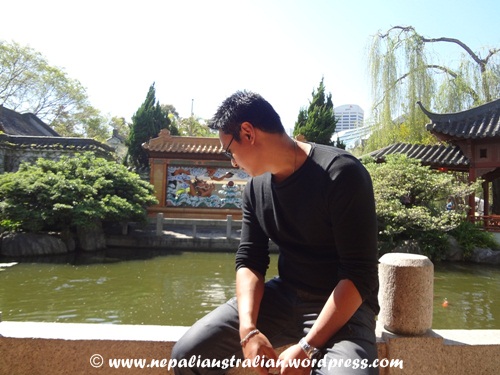 We were there to enjoy the day so we just walked around the garden and enjoyed the sun taking photos from time to time. There was a big pond in the middle of the garden and it had big colourful fishes. I actually forgot that we were in the middle of the city once we were inside. As spring has started here, there were so my beautiful flowers in the garden. I just loved everything in it: the trees, well-trimmed plants, beautiful spring flowers, calm lotus pond and the magnificent temple. 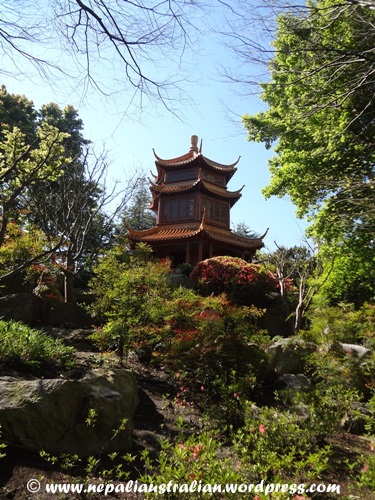 It was peaceful, serene, beautiful and calming. There is a waterfall which gives the feeling that you are in some national park. There are some alcoves to rest and overlook the whole garden to just soak in its natural beauty. We took so many photos as wherever I turned there was a beautiful view. The garden isn’t large but there are plenty of places to sit and take in the views. It took us about an hour to meander through the garden. 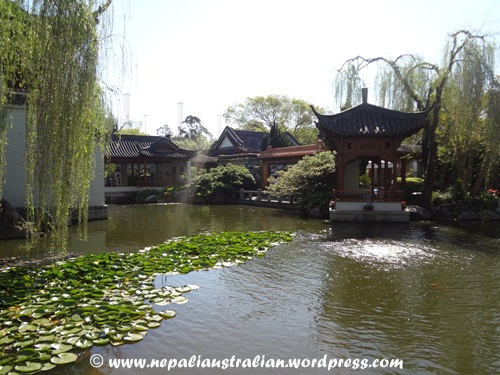 We saw a beautiful bridal carriage which is the imperial bridal carriage was used by Chinese Emperors in ancient times with extremely ornamental decorations. The jade carriage is typical of the historical carriages of past dynasties. It is believed 100 skilful artists were engaged in the laborious and intricate carving work. Over 300 tons of raw jade were used, the finished weight approx. 2 tons. 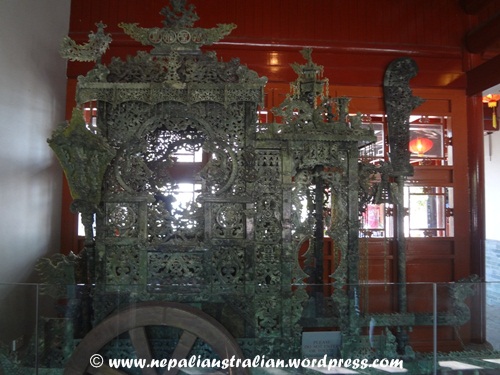 The carriage has a canopy decorated with entwining dragon motif with two lanterns in front. The main body of the carriage is carved into elaborate openwork of dragon, phoenix and fairies which are the symbol of Luck, Prestige and Authority. The two front shafts are cut as two lively charging dragons, guiding the carriage. Behind the carriage are two ornamental fans, which symbolise Royal Dignity. 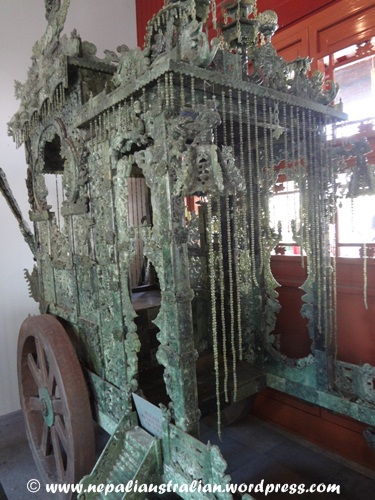 The age and the cost of the carriage are unknown, however it is believed the carriage came from the Chinese Province of Guangdong and it is said to be the only carriage known to be outside China. 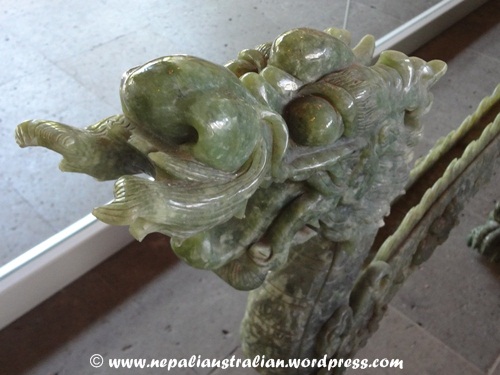 As we were walking around we saw a few people wearing traditional Chinese costumes and taking photos so we decided to find out more about it.

We found a place in one corner of garden where you can hire a costume for $10 and pretend to be a Princess/Queen/Emperor/Empress. They let you roam the garden with the costumes as long as you like and parade around the gardens and take as many photos as you like.

So me and AS decided to dress up as well and become Chinese for a while. I choose a red dress and the lady in the shop helped me to do my hair. AS choose a dark blue one and even got a long white beard to try with his costume. This was one of my favourite photos of the day.

Once we were dressed, the lady from the shop took a few of our photos. From there we walked the whole garden taking photos in different locations. We felt like we were in some movie walking around in the costumes and taking photos. Lots of people stopped to look at us and a few even asked us to pose so they could take a photo of us :). It was a really interesting experience to feel like we were in China. 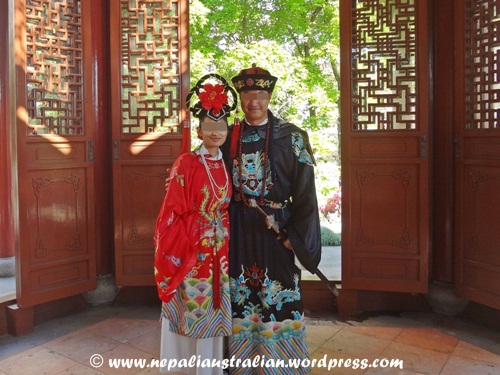 I saw two girls wearing the costumes so we took photos with them as well. It was so much fun. I really loved it.

If you feel hungry there is a teahouse. You can also hire a 45-minute audio tour in English and Mandarin, if you like.

For the price, we had an amazing day, relaxing and wonderful.

9 responses to “Chinese garden of Friendship”