Aroma festival at The Rocks

Every year, there are many street festivals in and around Sydney. Starting with the Aroma festival this year, I know that there will be more in the coming days and our weekends are going to be fun for the next few months.  Last Sunday, me and hubby decided to join thousands of Sydneysider at the annual festival for lovers of coffee, chocolate, tea and spice; the Aroma Festival at The Rocks.

It was a sunny day for a winter afternoon but it was still a bit windy. When we reached Circular Quay we could smell the coffee miles away and there were so many people enjoying the sun and the coffee.

This is the first time that I went to the Aroma Festival at The Rocks because as I told you before I am not a huge coffee drinker but I have heard so many good things about the festival that we decided to go this year. It was said that, this year, there are more stalls, more coffee, and more ground to cover at the festival. The festival is spread out starting from the wharf outside MCA museum, all the way up to Kendall Lane, then stretching all the way down Hickson Road reserve under the Harbour Bridge.

Everywhere we could see there were families enjoying the festival and every stall had a long queue. Most coffee stands had more than 20-30 people lining up, and food stands had around 20+ so it was hard to decide which stall to queue at.

After going around for a while we decide to go to a food stall and had our chicken wrap and lamb and rosemary roll as both of us were starving. We had to queue for 10 minutes or so just to get those. We really want to have this big hot dog but there were so many people in the line that we decided to go to the shortest line there.

The event organiser has even put their creative skills to the test and set up this massive Dame edna mural by using 1000 cups of Grinders coffee in four different colour tones. The mosaic, believed to be a tribute of Dame Edna, is set to break a new Guinness World Record after Aroma’s previous record was ‘pipped’ by a coffee-roasting festival in Hawaii. It is so impressive viewed from the top level platform at the Overseas Passenger Terminal.

For those of you who don’t know Dame Edna, she is a character created and performed by Australian Dadaist performer and comedian Barry Humphries, famous for her lilac-coloured or “wisteria hue” hair and cat eye glasses or “face furniture,” her favourite flower, the gladiolus (“gladdies”) and her boisterous greeting: “Hello, Possums!” As Dame Edna, Humphries has written several books including an autobiography, My Gorgeous Life, appeared in several films and hosted several television shows (on which Humphries has also appeared as himself and other alter-egos).

There were lots of freebies like tea samples, packet of fair trade tea bags, artificial sugar, chocolates but to get most of them, you had to like their Facebook page on the spot. I reckon that is a great way of marketing.

There were more coffee varieties than I could remember and there were also a lot of talk about Fairtrade and sustainable coffee at the festival to ensure a better deal for producers and workers by investing back in the local community.

Apart from the coffee, chocolate and sweet treats were also a highlight this year with so many varieties to choose from. There were some great looking cupcakes, Tea leaf readings, coffee cup candle workshops etc. along with huge cups with which you could take photos. 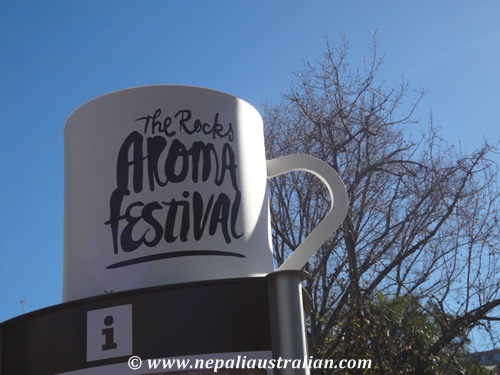 Also for coffee fanatics, there were gadgets on display in a few stalls. From industrial size coffee machines, to a hand held espresso maker, you can try and buy whatever you fancy.

At a few different spots, there were bands playing music and people were enjoying their coffee and music. 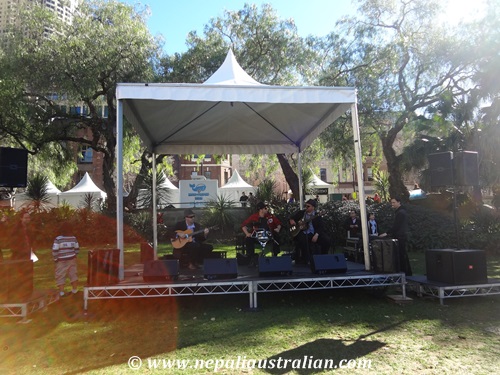 We were there for around 2 hours and there were simply so much to try and taste.

Looking forward to welcoming Spring and many more street festivals 🙂

16 responses to “Aroma festival at The Rocks”