My China Southern Airlines trip from Sydney to Nepal

This time for our trip to Nepal, against everyone’s advice, we booked China Southern Airlines to Guangzhou and then to Kathmandu, Nepal.

Few months ago, before our decision, I had put the question in my Facebook if anyone had any experience with the airlines before. The response appalled me because everyone was complaining about how awful it was. Everyone suggested not going ahead with them. Their exactly words were, “Nightmare”, “Flight from hell.”, “Do not fly with them.”

Me and AS has never flown the airline and I was shocked to read a few of the reviews and I definitely don’t want to be in their shoes. I was not too keen to book the flight.

But while doing my research, we found out that even though many people were not happy about the airlines some time ago, since October 2013, they introduced A380’s from Sydney to Guangzhou and the reviews were saying it is better now.  The fare for the airlines came to be cheaper than others by $150 per person return with only 2 hours for transit compared to above 6 hours in other airlines. The other thing was on certain routes the airlines allowed 2 pieces 20 kg luggage which was a big bonus.

As you can imagine it was a tough decision for us but finally we decided to give China Southern airlines a try. I was not expecting much but I was pleasantly surprised from the start. The check in was smooth and the flight was not too full. Apart from 45 minutes delay before take-off which was announced, things seemed to be going fine. At that time I was a bit worried what would happen with our connecting flight.

As we boarded and took our seats, the passenger in the seat in front of me called the flight attendant as something was leaking from above. It seemed like water from the air conditioning. The matter was dealt smoothly and he was allocated another window seat.

I am very happy with the plane as there was enough leg room but I am not very tall :). We settled down well and I spent the next 2 hours watching a movie, The Job. Great movie btw and very intriguing, made me want to go ahead and do what I believe in instead of living an ordinary life to just die one day. Anyway, the first meal was served and we had a choice of seafood or beef. As we don’t eat beef (why not can be another post for later), we had seafood. This reminded me of getting the meal order beforehand next time. 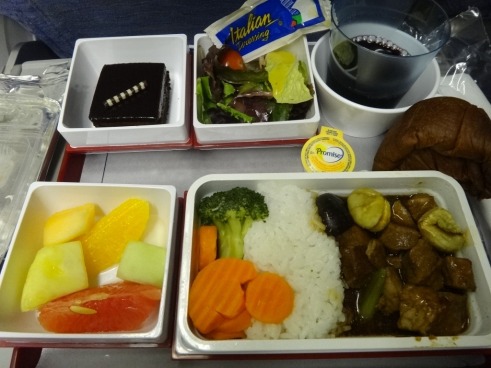 Anyway it was an ordinary meal like in any other plane, so no complaints. I was hungry so I ate some. No matter how many times I travel; sometimes it is so hard to kill the time in flight.

I was glad that I was not travelling alone. I talked to AS from time to time and then watched more movies followed by another meal and I was delighted when the pilot announced we were going to land in Guangzhou soon.

Once we landed in Guangzhou airport, we ran to find our connecting flight to Kathmandu as it was only an hour before boarding. We ran pass the security check and were breathing with relief when we located the sign that said flight to Kathmandu Nepal. We stood in the queue and were happy that in next 6 hours we would be in Kathmandu. This would be the first time that I will be landing in Kathmandu in less than 24 hours so I was feeling very happy. So far our experience with China Southern was great and I prayed that we didn’t miss the connecting flight as there were many people in the queue.

As we were waiting, an airport staff came and asked all the people who were travelling to Kathmandu to come to the side. It was a great relief for us as it meant we would be in an express line to the gate. As we stared to gather at the designated area, the staff gave all of us a sticker with our flight number and explained the following.

“As the weather in Kathmandu is really bad right now, planes cannot land there which means there will be no flight tonight. The next fight will be tomorrow morning at 9 am (14 hours later) so please follow me so I can sort things out for you. I am really sorry but you have to spend the night in Guangzhou. We will be providing you with accommodation for tonight”

There were around 15 of us and all of us were not pleased with the announcement. We had all booked the flight because it was the quickest but now it turned into be the longest. I looked at AS and just laughed and said, “Let the adventure begin.” with my luck it should be a great one too 🙂 .

It’s time for me to go upstairs and help my MIL with breakfast so I will continue my adventure in the next post.

Till then take care everyone. Nepal holiday is going great, more updates soon 🙂

This entry was posted in Nepal 2014, Travel and tagged Guangzhou airport. Bookmark the permalink.