Yesterday I was just going through my old papers and I came across a pile of letters. They were letters from my pen pals from my school days.

When I was in middle school, we had an English teacher named Sally Baker who encouraged everyone to write. So she had this idea for all of us to have pen pals from different schools around the world. She got around 100 letters from students from US and randomly gave those letters to us.

I got Emily Roberts from Massachusetts, US. She wrote,

My name is Emily. I love flowers and Unicorns.

Will you be my friend?

There were a few stickers of unicorn. 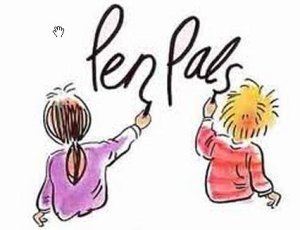 I felt so special to get her letter so  I send my first letter to her and then we were pen pals. She used to send me birthday and Christmas cards and I sent her Dashain / Tihar and birthday cards. It was fun to know someone so far away. It was really nice and I would tell everyone who listened that I have a pen pal in US.

Around the same time, I also made 2 more pen pals, Ahmed Yakub from Lahore,Pakistan and Raja Gurung from Darjeeling,India.

With Ahmed Yakub, I had a short friendship as he stopped writing to me after few months but with Raja, our friendship is still on. He is my Facebook friend now. He is happily married with 2 kids.

Back then, he used to send me ‘Churpi’ from Darjeeling and it was a big treat for me. Churpi is a dried smoked cheese and they said Darjeeling’s Churpi is the best. He even came and visited me when he was holidaying in Nepal with his parents. It was so weird to see him in person. Even though I had seen hin in photos both of us felt bit awkward when we meet face to face. But I was glad we met. He is one of the nicest persons I have ever met and I am glad he is my friend now.

With Emily, I lost touch after 1998. I am not sure what happened but I didn’t get any reply for 3 of my letters so I stopped writing to her.

I can’t believe I used to use snail mail and wait weeks for the reply to come back. It was really exciting to see the postman coming to my door and deliver the letters from my pen pals. Surprisingly back then my mail was never lost even when it contained birthday gifts and big packages.

f someone asked me to write a letter these days I would never do it but back then I learnt so many things from these pen pals about their country and culture. There was no internet or 1000’s of channels on TV so my source of information was books. I used to go to libraries and read lots of books but to have pen pals had its own adventures. I received first hand information from them. I could ask questions to them and they would write about things in their countries. I used to write about our festivals and send them postcards of Nepal. Emily once sent me the American flag.

While blogging I felt, it is a modernised version of having a pen pal. We don’t know people when we start reading someone’s blog, they are just a name or initial in most of the cases but if we follow their stories, we learn a lot about them. That’s why I guess I started to blog and read blogs.