The tenth day of Dashain is called ‘Dashami’. It is also known as Vijaya Dashami and it was the day Goddess Durga was victorious over the demons. It was also the day Lord Rama won the war with the demon king, Ravana, supposedly through the Durga’s blessing. The day is, hence, symbolic of good triumphing over evil. It is on this day that the jamara is finally utilized; the elders put tika (a mixture of rice, yogurt and vermilion) and Jamara on the forehead of younger relatives to bless them with abundance in the upcoming years.  The red Tika also symbolizes the blood that ties the family together.

Elders give “Dakshina”, a small amount of money, to younger relatives at this time. People visit elders in their home to receive blessings. The importance of Dashain also lies in the fact that on this day family members from far off and distant relatives come for a visit as well as to receive tika from the head of the family.

This continues to be observed for five days till the full moon during which period families and relatives visit each other to exchange gifts and greetings. This ritual of taking tika from all the elder relatives (even distant relatives) helps in the renewal of the community ties. This is one reason why the festival is celebrated with so much of vigor and enthusiasm.

Before the collapse of the monarchy system in Nepal, thousands of people ranging from the ministers, diplomats to the general public used to gather in the old royal palace to take the tika and blessing from the king, who is considered to be the incarnation of Lord Vishnu. However after the collapse of the monarchy system the president of the country who is considered the head of the state has been continuing the tradition by offering the tika to the general public and ministers.

A lot of feasting takes place in the meantime and everyone makes merry. Dramas of Goddess Durga fighting demons are also frequently staged.

The last day of the festival which lies on the full moon day is called ‘Kojagrata’ Purnima. The literal meaning of Kojagrata is ‘one who is awake’. On this day Goddess Laxmi who is believed to be the goddess of wealth is worshiped as it believed that goddess Laxmi descends on earth and showers whoever is awake all night with wealth and prosperity. As a result, many spend the night playing cards and doing other activities. The festival concludes when the remaining jamara and the holy vessel are disposed of by bringing them to the river.

This morning, I woke up, performed puja at home with Jamara and then went to my brother’s place where all my family gathered to celebrate Dashain. It was fun filled affair with lots of food, playing cards and having Tika ceremony.

P.S. I am so happy to share that my Jamara grew really well this year. It became longer than last year.  🙂 Here are some photos. 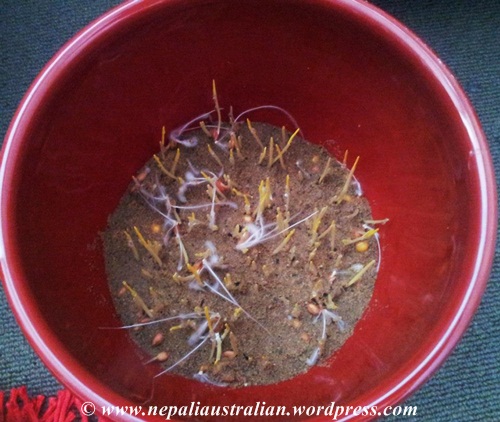 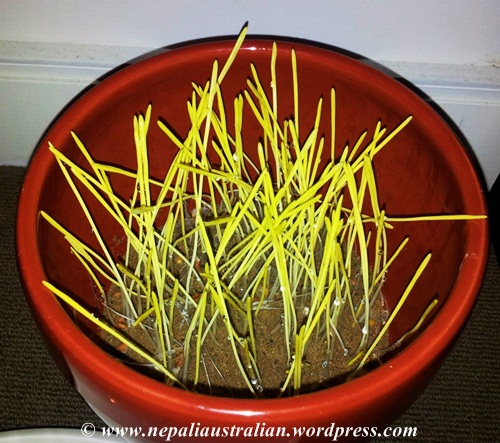