We have finally moved to our new place. The removalists took almost double the time than we had expected but at the end, all was well; nothing broken.

Our new place is bigger than the old one so we are still getting used to the extra space. I love it but I know that the cleaning part will not be as easy as before. I think 80% of the unpacking is done and I am hoping to do the rest by this weekend. Thank you everyone for your good wishes.

During the move, we saw that the piggy bank I was keeping for the coins was full and too heavy to be moved. I have had that for over 4 years now and I was putting all my 5 cents, 10 cents, 20 cents, 50 cents and some $1 and $2 coins in it.

So, we went to the bank to get it cashed. Here is what it looked like. Guess how much was in it?( Will give the answer later so have fun guessing 🙂 ). I was happy to get the extra cash. 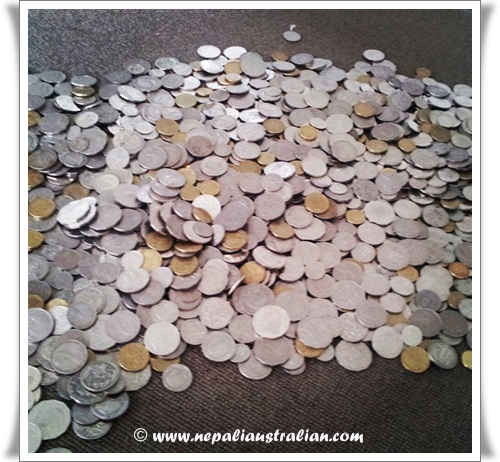 As bank has the coin-counting machine these days, we just tipped our money and it counted away. Me and AS were happy to see our money count rising. Then a Nepali lady, who is a customer at the bank, came to us and told us that the machine does not work properly and she was short $104 dollars when she put $600. I was worried as it was more than 15% of the total. She even showed us the receipt to prove her claim. At that stage, we were more than half done so we didn’t have a choice but to get whatever the machine printed. But that got me thinking that from the next time I am going to count my coins at home and then only go to the bank. I really hope we did not lose any money.

Has anyone had problems with these machines at the bank? Should we trust it?

Finally, I feel a bit of relief after moving so tonight hubby and I are going to relax and indulge ourselves with an aromatherapy massage. Every part of my body is aching so the massage should do wonders.

Still no phone and internet at home but. Hope by next week that will be resolved as well.

This entry was posted in Australia, Personal. Bookmark the permalink.