In life small things give you pleasure. But at the same time, sometimes we are so blinded by the big picture we miss small things.

So I am writing my experience from last weekend about my own failure to notice minute things.

Last weekend, I went for a drive to NSW south coast, one of the magnificent drives near the sea. It was with AS and our friends, DS, DR and DS’s parents who are visiting from Nepal. I just loved the drive and had passed via that road many times to go to Wollongong.  One of the best parts of the drive is to pass through the Sea cliff bridge. You will agree with me that, the view is just breath-taking and so many TV ads for cars are shot there.

While we were there, her parents mentioned that, they saw in one of the TV serials in Nepal that there is a bridge where you write your name on a padlock and lock it on the railings at the side of the bridge. Then you throw the key into the sea with all you bad luck. As they had seen that, they wanted to go there and do the same.

But to my surprise I had never heard about that before. In my mind, I was trying very hard to think if I had seen or heard or read anything like that but nothing came to mind. Thanks to the latest phone, we have internet on the go so AS Goggled it. To our surprise it said it is in the south cost in Seacliff Bridge and luckily we were only a few kilometres away.

So we parked the car and started walking to the bridge. I have driven over that bridge so many times before but never saw the padlocks so we thought of asking a few people where on the bridge, it is. Surprisingly even the local people had no idea what we were talking about. Anyway, we walked towards the bridge and to our surprise, there they were. Lots of padlocks from the start to end of the bridge and I had never noticed them before. I guess I was so mesmerised by the view that I failed to look at the railings with their padlocks on the bridge. 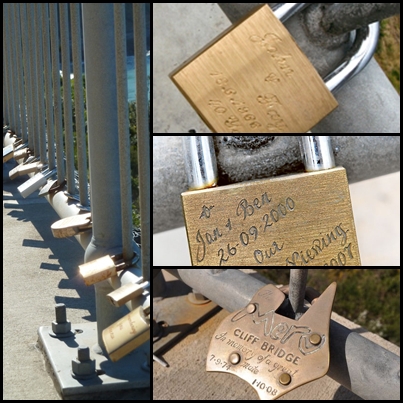 Once I came back home I had to know what that was all about so again I asked my good friend Google and found the following information from website click here   for more info.

It was started by a couple, John and Fay who lived in Helensburgh and  saw something similar in Cinque Terre,Italy when they visited Europe. In 2006 John wanted to surprised his wife on their 40 years anniversary so he engraved their names with their wedding date on a padlock and locked it on that bridge. So romantic!!! And now there are so many of them following their foot steps.

One the way back to the car, we saw one more amazing thing, a tree with thongs (sandals) pinned to it. I am guessing that would be a one of its kind. 🙂

Here are some pics from the day

10 responses to “Lock it away”