This article was published in +977 (a Nepalese Lifestyle Magazine in Australia) in Jan 2013 issue. 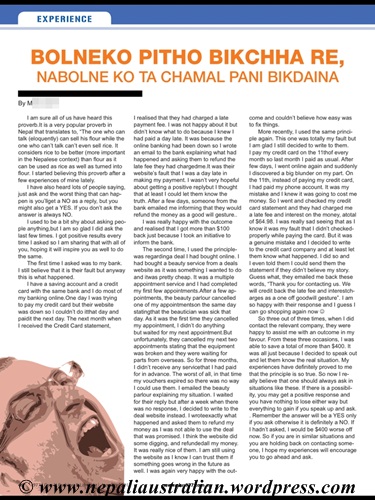 I am sure all of us have heard this proverb. It is a very popular proverb in Nepal that translates to, “The one who can talk (eloquently) can sell his flour while the one who can’t talk can’t even sell rice. It considers rice to be better (more important in the Nepalese context) than flour as it can be used as rice as well as turned into flour. I started believing this proverb after a few experiences of mine lately.

I have also heard lots of people saying, just ask and the worst thing that can happen is you’ll get a NO as a reply, but you might also get a YES. If you don’t ask the answer is always NO.

I used to be a bit shy about asking people anything, but I am so glad I did ask the last few times. I got positive results every time I asked so I am sharing that with all of you, hoping it will inspire you as well to do the same.

The first time I asked was to my bank. I still believe that it is their fault but anyway this is what happened.

I have a saving account and a credit card with the same bank and I do most of my banking online. One day I was trying to pay my credit card but their website was down so I couldn’t do it that day and paid it the next day. The next month when I received the Credit Card statement, I realised that they had charged a late payment fee. I was not happy about it but didn’t know what to do because I knew I had paid a day late. It was because the online banking had been down so I wrote an email to the bank explaining what had happened and asking them to refund the late fee they had charged me. It was their website’s fault that I was a day late in making my payment. I wasn’t very hopeful about getting a positive reply but I thought that at least I could let them know the truth. After a few days, someone from the bank emailed me informing that they would refund the money as a good will gesture. .

I was really happy with the outcome and realised that I got more than $100 back just because I took an initiative to inform the bank.

The second time, I used the principle was regarding a deal I had bought online. I had bought a beauty service from a deals website as it was something I wanted to do and it was pretty cheap. It was a multiple appointment service and I had completed my first few appointments. After a few appointments, the beauty parlour cancelled one of my appointments on the same day stating that the beautician was sick that day. As it was the first time they cancelled my appointment, I didn’t do anything but waited for my next appointment. But unfortunately, they cancelled my next two appointments stating that the equipment was broken and they were waiting for parts from overseas. So for three months, I didn’t receive any service that I had paid for in advance. The worst of all, in that time my vouchers expired so there was no way I could use them. I emailed the beauty parlour explaining my situation. I waited for their reply but after a week when there was no response, I decided to write to the deal website instead. I wrote exactly what happened and asked them to refund my money as I was not able to use the deal that was promised. I think the website did some digging, and refunded all my money. It was really nice of them. I am still using the website as I know I can trust them if something goes wrong in the future as well. I was again very happy with the outcome and couldn’t believe how easy was to fix things.

More recently, I used the same principle again. This one was totally my fault but I am glad I still decided to write to them. I pay my credit card on the 11th of every month so last month I paid as usual. After few days, I went online again and suddenly I discovered a big blunder on my part.   On the 11th, instead of paying my credit card, I had paid my phone account. It was my mistake and I knew it was going to cost me money. So I went and checked my credit card statement and they had charged me a late fee and interest on the money, a total of $64.98. I was really sad seeing that as I know it was my fault that I didn’t checked properly while paying the card. But it was a genuine mistake and I decided to write to the credit card company and at least let them know what happened. I did so and I even told them I could send them the statement if they didn’t believe my story. Guess what, they emailed me back these words, “Thank you for contacting us. We will credit back the late fee and interest charges as a one off goodwill gesture”. I am so happy with their response and I guess I can go shopping again now 🙂

So three out of three times, when I did contact the relevant company, they were happy to assist me with an outcome in my favour. From these three occasions, I was able to save a total of more than $400. It was all just because I decided to speak out and let them know the real situation. My experiences have definitely proved to me that the principle is so true.

So now I really believe that one should always ask in situations like these. If there is a possibility, you may get a positive response and you have nothing to lose either way but everything to gain if you speak up and ask. . Remember the answer will be a YES only if you ask otherwise it is definitely a NO. If I hadn’t asked, I would be $400 worse off now. So if you are in similar situations and you are holding back on contacting someone, I hope my experiences will encourage you to go ahead and ask.

This entry was posted in Published, Social Issue and tagged +977, +977 magazine, +977 Nepalese Australian magazine, nepali proverbs, plus977, you have to speak. Bookmark the permalink.