Czech Republic was one of the countries that I was very excited to visit. I have seen so many photos and travel show on Prague that I knew it is going to be a beautiful experience. 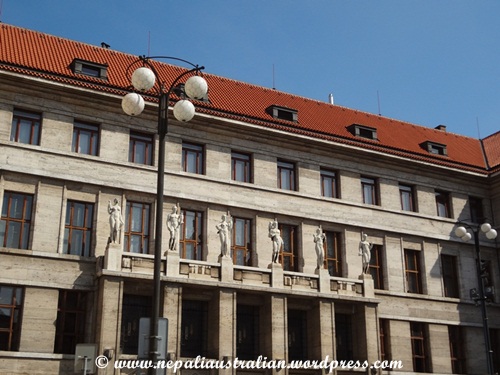 Prague didn’t disappoint me at all. What I saw of it was gorgeous, beautiful coloured buildings, a stone bridge, and hilly vistas. Prague is the capital and largest city of the Czech Republic situated in the north-west of the country on the Vltava River. It is one of the historical places we visited and I really loved it.

We had a local guide for the city tour and it was one of the most amazing and oldest cities with lots of history. I forgot the name of the guide but he was funny and he used to repeat everything twice. At first it was very awkward but then we got used to it. 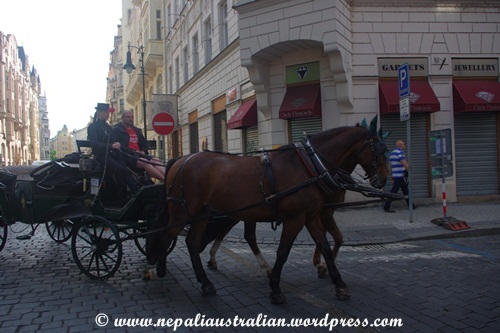 We were dropped off near a bridge in Prague from where we could see the Grand Prague castle. We took a few photos there and then the guide took us to the new town area of Prague. We passed through by beautiful houses and churches which made the town look really amazing. We went through Welceslas Square which was originally a horse market and Charles Square which was originally a cattle market.

It is Prague’s most lively and photogenic bridge over the Vltava.  It is the stone bridge which is really old. On our right, we could see the famous Malá Strana. When we walked past the gate there is the bridge between Prague Castle and the city’s Old Town and adjacent areas. I have seen so many photos of this bridge that I didn’t feel that I was there for the first time. We walked around, took photos with the statues on the bridge.

There is a tower standing on each end of the bridge. Both towers can be climbed for a view of Prague and the bridge from above. The place seems to be also popular with Czech artists, musicians and souvenir vendors whose stands line both sides of the bridge .

Our next stop was this phenomenal Gothic cathedral, called St Vitus Cathedral. It contains the tombs of many Bohemian kings and Holy Roman Emperors; this cathedral is an excellent example of Gothic architecture and is the biggest and most important church in the country.

The Old Town Square is the oldest and most important square of the historical Prague. It is surrounded with historical buildings such as the Old Town City Hall with the famous Astronomical Clock, the imposing St. Nicholas Church and Church of Our Lady before Tyn, and many houses and palaces of various architectural styles and colourful history.

When I stood in the middle of the square, I could truly see why people love it there so much. Full of history and architecture, it was pleasant and beautiful place to spend hours admiring the beauty and history.

If you know the history of Czech Republic, this is the square where there was an execution of 27 leadersof the rebellion against Emperor Matthias in 1621. These days the square ground is full of restaurants with outdoor eating area and musicians playing traditional music.

The astronomical clock in the Prague square is the third-oldest astronomical clock in the world and the oldest one still working. It is really beautiful and looks so antique. It has three main components: the astronomical dial, representing the position of the Sun and Moon in the sky and displaying various astronomical details; “The Walk of the Apostles”, a clockwork hourly show of figures of the Apostles and other moving sculptures—notably a figure of Death (represented by a skeleton) striking the time; and a calendar dial with medallions representing the months. I must admit that people were so intelligent in those times that they have this complex clock built which works even till today.

The real author of the clock was discovered in 1961 in an old document, which describes the astronomical dial and says it was made by Mikulas of Kadan in 1410.

The monument of the Protestant reformer Jan Hus, burnt as a heretic in 1415, is situated in the middle of the Old Town Square since 1915. It is one of the most important personalities in Czech history. 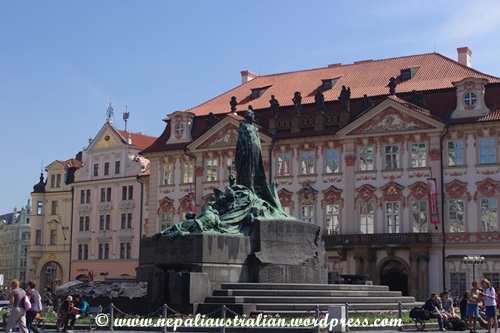 Master Jan Hus, the dean of the Charles University in Prague, criticized church practices such as selling indulgence. The monument consists of Jan Hus statue and statues of Czech people around him. Jan Hus statue is looking at the Church of Our Lady Before Tyn, which was the main church of the Hussites. The people around him are the Hussite warriors on one side and on the other side there are prostrated people, forced to leave the country in 1620s, after the rebellion of Czech estates was defeated.

Church of Our Lady before Týn

In the old square, there is a cathedral which is called Church of Our Lady before Týn. The Týn church has always played a major role in the history of the reformation in Bohemia and it was the most important church of the Hussites in the 16th century. Inside, there are many fine sculptures from the pre-Hussite period.

Church of Our Lady before Týn

The towers of the Church of Our Lady before Tyn are 80 metres high. The church is 52 metres long and 28 metres wide and there are many Gothic, Renaissance and Baroque works of art inside. There is a Gothic tinny font from 1414, the oldest one in Prague. You can see a Gothic baldachin by Matthias Rejsek from 1493 on the pillars there.

The main altar is decorated with paintings by Karel Skreta. There are 19 altars in the church altogether. The church organ, made by Hans Heinrich Mundt in 1673, is the oldest one in Prague.

You can still see the Prague meridian in the paving of the square. It indicates the place, where the former Marian column used to cast its shadow at noon. There is an inscription in Czech and Latin languages, saying that time used to be measured according to the meridian.

Medieval houses at the square

Medieval houses at the square

The first houses were built around the Old Town Square in the 12th and 13th centuries. Some of the present houses still have their Romanesque or Gothic foundations, basements or ground floors. The Old Town City Hall was built in the 14th century and the Church of Our Lady before Tyn a little later. The Old Town Square became the economic and political center of Prague Old Town. 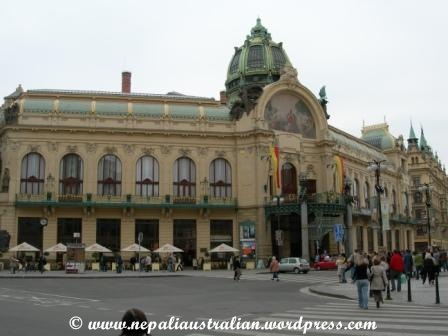 The Municipal House, a national cultural landmark, is among the most significant Art Nouveau buildings in Prague. It is located in the very centre of Prague, directly neighbouring the Powder Gate. The most significant Czech painters and sculptors of the time participated in the decoration of the Municipal House. That list included: Jan Preisler, Mikoláš Aleš, Max Švabinský, František Ženíšek, Ladislav Šaloun, Josef Mařatka, Josef Václav Myslbek, Alfons Mucha.

I have to say, the dinner we went to in Prague was the best one on the whole tour. They knew how to entertain the guest and get them involved the whole evening. The evening started with  traditional music and folk songs followed by dances.

They served us a typical Czech meal including unlimited drinks with wine served from special glass pipes.

Once the dinner was done they invited us to dance and taught us how to do the traditional steps. Overall a very happy experience. 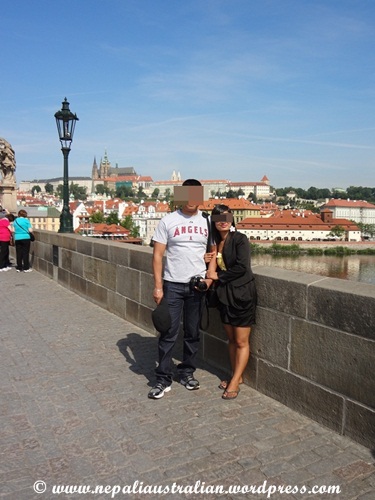 Prague was really a great place to enjoy traditional European hospitality and it was the cheapest place in Europe to do some shopping. AS bought a pair of shoes and I bought 3 while we were there. I definitely need to come and see more of Czech Republic in future.

From Prague we went thru Bohemia and Moravia before crossing into Austria.