Of course one has to go to the Cabaret when you visit Paris for the first time. So it was on our to-do list. We wanted to watch Moulin Rouge as I had heard great reviews about it. When we were there we couldn’t get the ticket for that so instead we went to watch a show called “Paradis à la Folie” in Paradis Latin Cabaret.

The Paradis Latin is a theatre at number 28, rue du Cardinal Lemoine, in the Latin Quarter of Paris. Le Paradis Latin is one of the oldest cabarets in the world and the only cabaret situated on the left bank of Paris in the original, yet very expertly renovated building that was originally constructed by Gustave Eiffel. 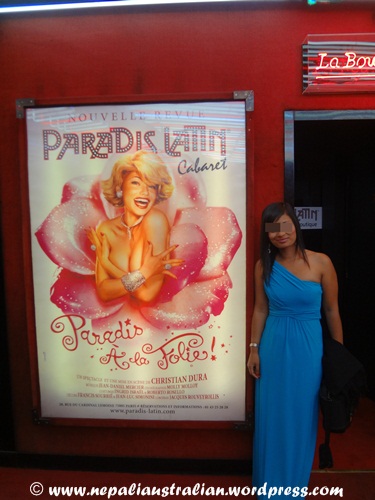 Paradis Latin features the famous French Can-Can, there is a friendly atmosphere with a sexy and mischievous for an almost 2 hour revue that is definitely not suitable for children.

We paid 88 euro per person with one glass of champagne included. There was dinner option as well but we didn’t do it. 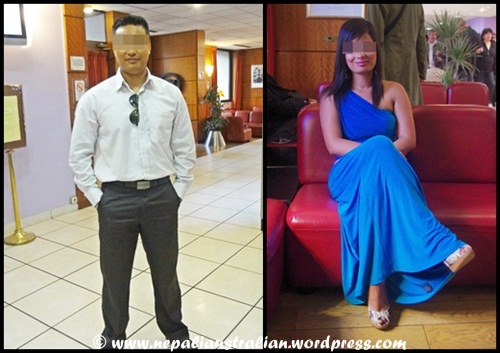 I was dressed in my long blue dress and AS wore his formal pant and shirt.

When we got there, the hall was full and there was some music going at the background. A waiter escorted to our seats and served us the champagne.

It was interesting to see mixed crowd in the room. It looked like there were people from all over the world. There was a big table full of Indian tourist with families. I was surprised to see grandparents who looked 70+ and also kids who looked 7 years old or younger. 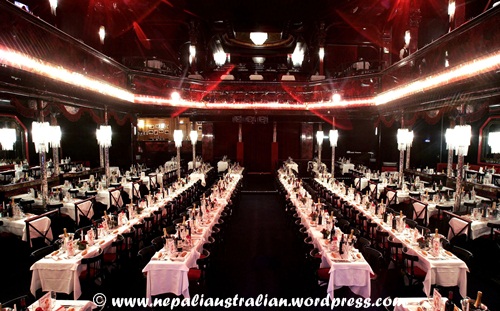 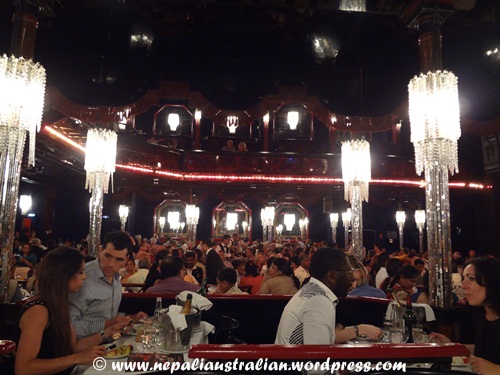 The theatre is two floored and looks liked it fits almost 200 people. The decor is very old style with big chandeliers and wallpapers. The Paradis Latin considers itself to be the most Parisian of the great cabarets and this can be seen in the decoration of the theatre, the world famous French Can-Can and in the ballets, the cosmopolitan dance troupe with their shimmering costumes and the previous shows, or revues as they are known, such as the Paris Paradis, Nuit de Paradis and Champagne

The show is advertised as featuring original music, stunning costumes and dance routines that are sure to take your breath away.

The theatre must aim at tourists because the compere translated everything he said into English so even if you speak no French at all you won’t miss anything. 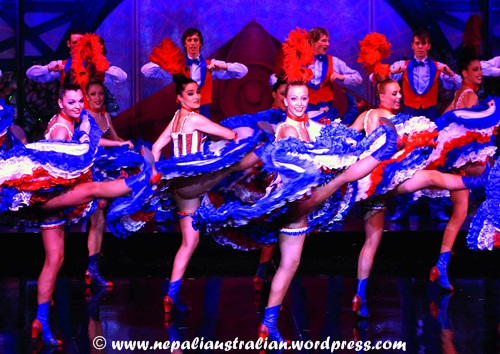 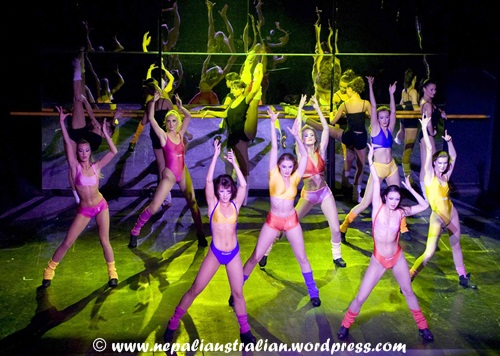 When the show started, they turned off the lights, and the announcer started his presentation, first in French, then in English. The show is fine for both French and English-speaking clients, however, the announcer does make a few jokes in French .The show at the beginning was very slow but later it became more interesting. There were always half naked dancing girls (disco style, cheerleaders…), male dancers, acrobats and one singer. The costumes and settings varied a lot from one act to the next, and the show is supposed to be a timeline of love in Paris, starting in the early 1900, going all the way to 2089. 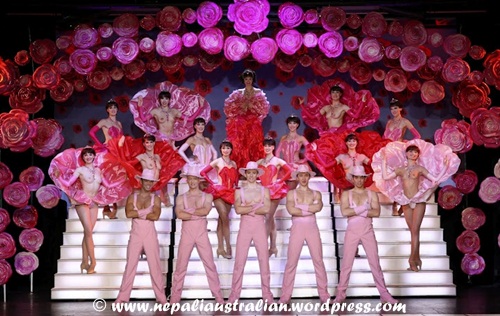 The highlight was a man riding a unicycle with his juggling act and a gymnast on a trapeze.  The can-can at the end was great and put everyone in a dancing mood. The show was done with style and it was very entertaining.

As it was my first experience, I found it interesting as I kind of knew what to expect. We had a mother and daughter on our table and they didn’t like it at all. And all the nudity made them uncomfortable.

Over on the big table full of Indian tourist with grandparents and grand kids, they seemed to be stunned.  I am sure whoever asked them to go for this show never explained to them that there would be nude girls so most of them were looking away from the stage or just putting their head down.  I won’t be comfortable to watch that show in front of my parents or kids as well so I can understand what was going on in their heads. What a waste of money for them. Also I am not sure how they allowed kids to attend this.

With incredibly talented artists, a good choreography and a mass of colours showcasing beauty and rhythm through ballet, tap dancing and other attractions, it was one of the most exciting evenings we had in Paris.

AS and I am so different in so many things. One of those things is our choice of movies.

My preference for movies is comedy or rom-com. I like thrillers as well but horror is a big NO. AS is a big fan of horror and science fiction movies.

My theory is, if I am paying money to be entertained, why would I want to get scared? I would much prefer to watch light hearted movies instead.

So the thing is , selecting a movie that we both enjoy is quite difficult. That is why we made a deal. Each of us gets to choose every other movie.

The last time we went for a movie he watched Jonny English Reborn for me so last night he chose a movie. And his choice was The Thing.

It is a science-fiction horror movie which got a pretty good review. I really didn’t want to watch it but I had to keep my end of the deal.

The movie was ok and not too scary. Like every movie of that kind, the storyline was so predictable with only a few survivors left at the end. Some of the scenes were disgusting but I survived the movie.

Dinner before movie and popcorn, a drink and a cake during the movie entertained me more than the movie did but I am happy since it is my turn next. I am definitely taking him for a rom-com now, just to annoy him 🙂