According to Newari tradition, girls are married three times in their lives.

First one is called ‘Ihi’ then ‘Bara Tayegu’ and then the real human marriage.

I am writing about the first marriage in Newar girl’s life which is called ‘Ihi’. “Ihi’ is also known as Bel Bibaha in Nepali. It is performed before a girl turns 13 years old. It is a compulsory ceremony every girl has to go through in most Newar community.

I too had the ceremony held for me but I can’t remember a lot about that day. I was quite small, I think 7 or so years old when the ‘Ihi’ was held for me.

In ‘Ihi’ ceremony, the girl is married to Lord Vishnu with the bel fruit (wood apple) as a witness. This ceremony is performed to save the girl from evil and malicious spirits but the most important reason is to protect the girl from unpleasant humiliation of widowhood.  As I mention in my post Widows in Nepal, it is really hard for the women in Nepal when they become widows. They had to take part in ‘Sati’ process in the old days, so in order to save their daughters from ‘becoming Sati’, Newars started a tradition in which they married their daughters to Lord Vishnu first. So even if her human husband dies in the course of her life, she doesn’t need to take part in ‘Sati’ ritual since her first husband, Lord Vishnu is still alive.

Some also believed this tradition allowed women to be more independent of their husbands. They can divorce or become widows without losing reputation.

Ihi is performed in mass over two days. It is normally organised by priests in their own house or backyard or someone can choose to host it in their house.

The first day is called Dusala Kriya. On this day, young girls have to bathe with pure water and are dressed like a bride in ankle length skirt, blouse and shawl. These days, you will see them as mini versions of traditional Nepali brides. Then all the girls will gather in the priest’s house. They sit on the floor in a long line with their mothers. Then the Puja begins where these girls go through sequences of ritual actions of purification. They have to worship images of Suvarna Kumara, the golden Bachelor which is an aspect of Lord Vishnu. It normally takes 5-6 hours for this ceremony to be over.

The second day is the most important day of the ritual  ‘Kanyadan’ (giving away of the daughter by the father) is performed on this day. For this day as well, the young girls are dressed as brides and taken for the Puja. On this day, they wear some special ornaments as well. 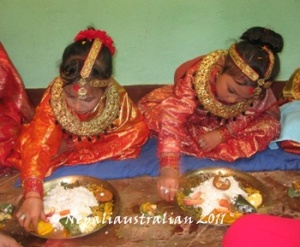 There will be a special person who cut toe nails for all the girls  and then paint the feet with red colour called ‘Alah’. Also at the end of the day, ‘Thaa bu’ , a plate which had eggs, yogurt, wine, fruits, Roti, meat, fish and much more for the girls to eat is served like in the real wedding.

There will be more Puja performed and the day will end by the father doing a ‘Kanyadan’ and giving away his daughter to Lord Vishnu in marriage with the Bel fruit as a witness.

‘Ihi’ is one of the many tradition the Newar community in Nepal follow and is unique to them.