It is always great to report success of people from Nepal. Today I am introducing Varsha Thapa, a beauty with long cascading dark hair, enviable skin and exotic features who became the first ever Nepali to walk the New York Fashion Week in 2011.

She’s been recognized as one of Nepal’s first supermodels and she is represented by Wilhelmina Model Agency. She is the first and only Nepali model to be represented by a major agency in America. She made her runway debut in Spring/Summer 2012 during New York Fashion Week walking in 10 shows including Prabal Gurung, Phillip Lim and Many Coon.

Varsha’s dream is to walk for Roberto Cavalli, be the face of Calvin Klein and to become a Victoria’s Secret Angel.

Here are her details

Varsha is a graduate of Hospitality Management but decided to become a model because of her passion for modelling. Since having arrived in New York, Varsha has been mentored by her scout, Roman Young. “He has helped me with everything from my walk to advising me on what to wear when I go for casting calls,” Varsha said.

Varsha has been adjusting really well in New York as, on a single day, Varsha had casting calls scheduled with 19 designers. Impressively, she made it to 18 of them. The gruelling nature of the industry is the norm, especially for Fashion Week. But Varsha has also been sent to casting calls at some of the industry’s biggest names like Donna Karan, Calvin Klein, Tom Ford, Marc Jacobs, an indication of where her agency thinks her potential lies and looks fit.

She was also featured in Navayaata magazine in Nepal as well as Rouge Magazine in China. 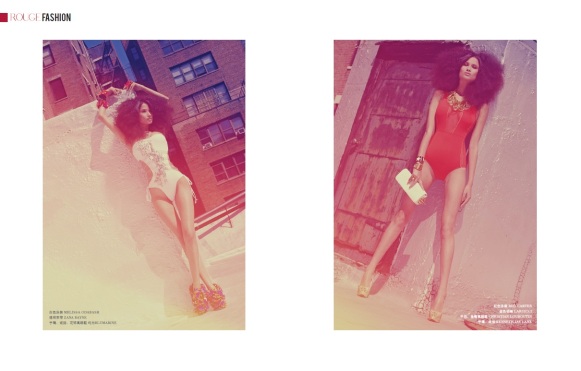 Here is her interview with Women’s Wear Daily (WWD)

WWD: It’s getting late in Paris — are you heading to bed soon?

Varsha Thapa: I just got to another job now, for Moda Operandi. We’re shooting Christopher Kane, I think. This is my first time working with them. I came from a fitting at Vivienne Westwood. I tried on like eight outfits. The shoes were crazy. Vivienne alwaysFXFLd7IfrZi45yu.ZOi3sc6D2CbHo_hmried were in a heart shape, with block heels. They were kind of hard to walk in, and I had to walk maybe twelve times.

WWD: Before we talk about Paris, how was New York Fashion Week?

V.T.: Great. I did Kimberly Ovitz, which was really fun. I like her clothes a lot. It was really artistic. Generally, she does like black stuff, but this time she included colour. She had these leather pants that were really cool. They were like painted gold or something. They were amazing.

WWD: Did any other shows stand out?

V.T.: I did Bibhu Mohapatra, and I really like his clothes a lot. That show had crazy hair. First there were braids, then they had to back-comb everything. There were a lot of things going on. It was painful, but it was only for a little bit, so I was fine. There was a bun and on top of that, there was a lot of crimping. There were a lot of clips in my hair. It took a while to take them out. I slept on the pins and the next day, I was like, “What is this in my hair?”

WWD: What are your thoughts on Paris so far?

V.T.: The amazing thing about Paris is there are so many patisseries here. You don’t really have to think about what to get — there are so many amazing choices. In New York, you don’t have that. Either you go to Starbucks or some other chain. There is this place near my hotel, and I know it’s not the healthiest, but it’s so good. Every morning, I’m so tempted to go there and get a croissant. They have different types of croissants, a healthy kind and a regular. I get the healthy kind, but sometimes I sneak and get the regular.

WWD: Have you gotten to do any tourist-y activities?

V.T.: No, and this is my first time ever going to Paris. Thankfully, I’m here until March 20th. I’m going to go to the Eiffel Tower and the Champs-Elysées. I want to explore Paris, which I haven’t been able to. Since the moment I got here, I started working.

WWD: Do you know what shows you’ll be doing?

WWD: Do you ever get disappointed when you don’t book a job?

V.T.: Yes. Just a few days ago, after a casting, I got sent directly to a fitting because the designers liked me a lot. I was there waiting for four hours, so I had to miss two really good castings. Then, after the fitting, I was cancelled from the show. That was a really big disappointment, but it’s all right. It happens every season to every girl.