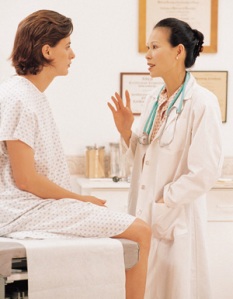 I have know about Pap test for a while as there are so many ads in the tv about the importance of getting a Pap test .

Look at the ad below for Pap test.

I had booked one test a while ago in April 2011 but for some reason I couldn’t go. Everytime I visit my GP , they would ask me if I had one done but I kept telling them that I would do it soon.

On Wednesday , I wasn’t feeling well so went and saw a GP near work. She was a young female doctor so I thought I will mention to her that I will need a Pap test as well. She asked me if I had one done before and my answer was no.

So after so many months of putting it off, I had my first Pap test.

It was really quick and I didn’t fell as uncomfortable as I thought I would. She just asked me to lie on a bed and examined my cervix. She place an instrument called a speculum and  took two swapes with wooden spatula which will be sent away to a lab for a test. All it took for the test was 5 minutes of my time.

I feel like a fool now for not doing it sooner. My result will be available by next week.

I am writing this post hoping that if any of my female reader is putting off doing a Pap test, then my experience will encourage you to go and book the appoinment. As I said before it is not as bad as it sounds and it can save your life.