I was recently going through a newspaper article and came across an article which talked about how celebrities are spending millions of dollars in security to protect themselves from crazy fans. I thought millions to protect from who? I did some googling and I was surprised to find a lot about crazy fans.

I have never understood the craze for celebrities. For last few days my Facebook wall has been full of my crazy friends who are fans of Twilight and are so excited to see the midnight screening of the movie that they keep on reposting the same thing again and again. I also have a friend who is so crazy about Bollywood actor Shah Rukh Khan that if anyone says anything bad about him she will fight with that person.

A While ago Miley Cyrus was here and there was this crazy fan who climbed on the stage scaring the star.

Every time there is a ticket sell of some band, I see people queuing for hours and hours to get the ticket. Don’t they have work to go to?

Another craze I have seen recently is for teenage singer Justin Bieber. Girls as young as 2 were in the crowd chanting his name holding cut outs that said “Marry Me”. Poor girls were so disappointed when, due to security reason, Justin couldn’t appear.

May be I don’t have that gene you need to be crazy about something. If I really think about it, I had never been so crazy for something that I skipped sleeping or queued for hours to get a glimpse of someone. Growing up I loved Backstreet boys and Bryan Adams and I would love to see them in concert but I will never be one of those fans who give everything to be close to their idols.

I like lots of actors, musicians, athletes but that doesn’t mean I will follow their every move.  On Google I came across the buzzard behaviour of fans of Bollywood actors. Here is the video of a fan worshiping Bollywood actor Amitab Bachhan.

And there is this guy in India whose whole house if full of picture of Bollywood actor Shah Rukh Khan. He even named his kids after the star’s son and one of the characters from his movie.

I think there are healthy obsessions where you follow celebrities and their life for entertainment but to go to the extend you worship the person and fill every corner of your house with his photos is simply crazy.

Another example of crazy fan is those who go under the knife to look like their idol. Look at the photos below. Lady in UK spent $ 16,000 to look like Michael Jackson. There are many more examples if you search the internet.

Also there is Octo mum in US who wanted to look like Angelina Jolie and spent all her money. 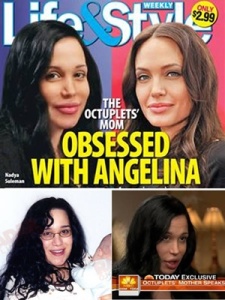 What is with the woman who had surgery to look like real life Barbie?

I don’t know how people forget that celebrities are people as well, doing their job in the spot light. They have their personal life and families just as we do and I am sure they will love to be left alone for a change so they can let their hair down and relax after a hard days work.