Dangi got a brilliant present this morning – his own custom built golf clubs from golfclubs.com.au.

He was quick to give them a go, commentating to everyone on how he went with each shot and grinning away especially once he got the driver in his hands and smacked it down the long Nova corridor!

Using Sid Lama to translate, Dangi told them all about his village, the music he enjoys (folk music), and his recent visit up Centrepoint Tower.

He had them laughing when he referred to Sydney as a “very nice village”, and quickly shook his head when Lakyn asked him if he had any tattoos.

But his best line came when they asked what he had done this morning. He replied he “got up, brushed his teeth, and took a shit”! That’s our Dangi!

Chandra Bahadur Dangi is the world’s shortest man and the boys from Universal Music, are big ‘Dangi Fever’ sufferers, so wanted to get the t-shirt signed. They said it was going straight to the pool room!

There was a 4D movie (fourth dimension is the feeling of movement) and so Dangi wacked the glasses on to get the full experience of animals flying at his head! Seeing he had no electricity in his house in Nepal, we think that was a pretty amazing experience for him.

We had a really clear day so Dangi got to see those amazing Sydney views. He had never even seen a skyscraper before he came to Australia so going up an observation tower was another new experience for the 72-year-old. 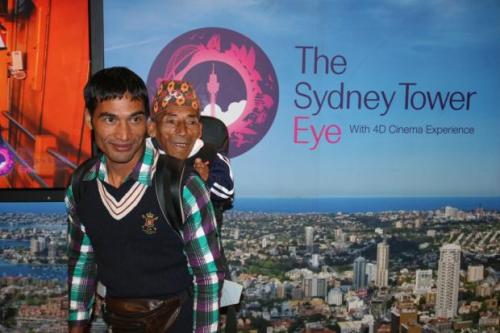 It was the first time the 72-year-old from Nepal had ever been to a beach, and Bondi Rescue’s Hoppo was there to say hi (or make sure he was OK!)

Dangi’s here for ‘Five Days of Dangi Fever’ with Fitzy and Wippa which finishes with a big live show from Opera Bar on Friday morning. 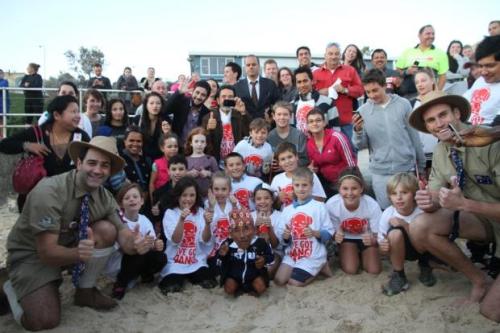 On Tuesday, Chandra Bahadur Dangi, with his nephew Dolakh and friend Sid Llama visited the Sydney Aquarium in Darling Harbour.

Dangi has lived his 72-year life entirely in Kalimati, a remote village in Nepal, so it really was an amazing experience for him.