Doleshwor Mahadeva is a Hindu Temple of Lord Shiva located in the Sipadol VDC, south eastern part of Bhaktapur District, Nepal. As my mum wanted to go there, one morning I went there with my parents. The temple is believed to be for the head of the bull at KedarNath Temple of Uttarakhand, India.

Legend has it that Pandavas reached the Kedarnath region to seek forgiveness from Lord Shiva for the loss of lives during the 18-day Mahabharata war. But Lord Shiva was not ready to forgive them and he took the form of a bull. The Pandavas soon realized that the Bull was Lord Shiva and tried to stop it by pulling the tail. Suddenly the head got separated from the body of the bull and the Pandavas could not locate it.

The body of the bull is presently worshipped in the Kedarnath Temple. People have been searching for the head of the bull since the period of the Mahabharata as they believed that it was hidden in the Himalayas. But so far all search proved futile and now Bhim Shankarling Shivacharya who was on a visit to Nepal happened to visit Jangam math in Bhaktapur in Nepal and was surprised by the striking resemblance of rituals followed in Kedarnath and Bhaktapur. Thus the temple is believed to be for the head of the bull at KedarNath Temple.

The road leading to the temple is good until the last 4 km where it turns into a small gravelled road. I loved the green land and cute village houses that we find on the drive to the temple. It was a very quick ride I have to say.

Once we parked and went through the main gate of the temple, I was surprised to find that the temple was smaller than I had expected and not many people were around.

My mum bought the puja from a local vendor and we went inside.

We were lucky that we got to do our puja straight away because as soon as we were done, there was busload of people coming to worship. Suddenly the place was busy and noisy that we even had to watch where we stepped when we moved. 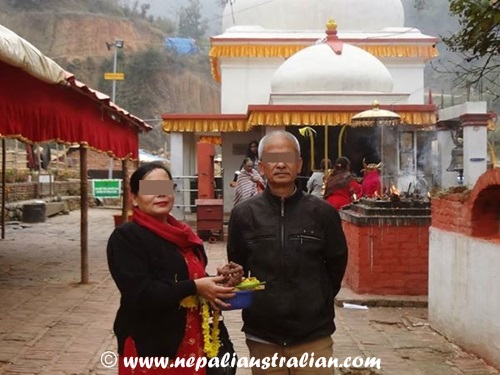 Apart from the main temple, the area also has one Dhunge Dhara (a traditional stone water tap found extensively in Nepal), a big trishul (a trident, Shiva’s particular weapon) and damaru (A small drum, shaped like an hourglass) and a few small idols around.

At one corner there was a sadhu who was blessing everyone passing by. I asked him if it is ok to take a photo with him and he agreed so here is the snap.

The visit to the temple as short as there was not much to do. My mum bought some fresh veggies from the local villagers and we were back on our way home.

The place is really nice to go to if anyone wants a short trip out of the city.