Why do so many drivers never use their indicators these days?

I know I shouldn’t be annoyed at petty things in life but sometimes I wonder what people are thinking when they are driving. When I need to turn or change lanes, I don’t even have to think, my hand automatically moves to indicate my intention but I have lately seen so many drives turn or change lanes without the indicators. I don’t understand why drivers are so lazy that they can’t make the effort to flick a switch.

It can be laziness in their part but that is really serious as this can lead to accidents and even death in worse cases. The worst part is they are not putting only themselves in danger but others on the road as well.

Because of their laziness and selfishness there are times there is unnecessary traffic congestion on the road. Say if I am waiting to go straight on a two-lane road and the driver in front of me is going right but didn’t blink until the last minute, I won’t be able to change lanes in time and go straight on the left lane which means I am stuck behind him. On top of that the drivers behind me will be stuck as well as they can’t see the indicator in the car in front.

Another example is when I come to an intersection and I see a car on my right with no indicator, so I stop to give way to them, wait for them to pass through in front of me, they then turn left instead and I am left thinking that I stopped and gave way for no reason.

Also in a roundabout at least half the cars never signal right to turn right, which makes it extremely dangerous. I always wait until the car has gone through most of the intersection before proceeding, because I don’t know when they will suddenly turn and smash into me.

I have seen many drivers who come by and pass me and others, weaving through traffic without any indication. I am sure not so many people have an emergency on a regular basis so why the rush? What is wrong with these people?

If you know the answers to any of these questions please do share and please take care when you drive and do not forget to use your indicators when necessary.

‘The indicators on your car tell people where you are going… Please use them!’

What the hell wrong with the drivers on road?

When I started this blog I though I will never rant on it, I will just share my experience from my life but I will not be a normal woman if I don’t rant so here it is.

What the hell wrong with the drivers on road?

I have driven in Australia, Nepal and New Zealand only so I won’t know about the rest of the world.But seriously I have seen one after another crazy driver on the road for the past few weeks.

I never understood why people have to talk on the phone while driving. Don’t you know it is illegal? And I am seeing this increasing number of people wearing a head phone while driving. Aren’t you supposed to be aware of your environment while you drive, so how the hell can you hear an ambulance when you have headphone on both yours ears.

And what’s with the people who try so hard to get into your lane. You think it is ok to let them go so you slow down or stop but they don’t even have the courtesy to wave a Thank You. They drive like they deserve that pass. Hello! I was just being nice and if I knew you would not even acknowledge my kindness then I would have never let you in.

And there are other kinds of drivers who feel that they need to race me. Even if they break the speed limit to overtake me. Anyway most of the time I catch up with them at next traffic light so what is the use of risking getting fined just to overtake and beat me by a few seconds.

And don’t even get me started on the bike and cycle riders. Motorbike riders always think they have to be at the front of the line when there is a red light so they will try to squeeze into any small space they can find to be in the front.

I know bicycle is environment friendly but I don’t live 2km away so I can ride to work. I need to drive so don’t give me that attitude. The worst part of a bicycle

rider is, in peak hours they will take up the whole left lane and all the cars have to change lanes to pass him. Then when there is a red light, they will just jump on to the footpath and cross the light with the pedestrians and then again go back to riding on the road. I don’t know why there is no stricter rule against this. Seriously, if cyclists need to use the road, they must follow the entire road rule as any other motorist. And if they can ride on the footpath then they shouldn’t be riding on the road.

And in the morning traffic, you get to see all kinds of drivers. There was a woman painting her toe nails on a red light while a man in the next car was shaving with an electric shaver. Seriously are we so busy that we don’t have time to do all this at home. Then there was this woman who was applying make up. At one light, one eye liner and at next light another eye liner, then lipstick and powder and a few more that I had no idea what she was applying.

I am sure they understand that doing other things while you drive will distract you and can cause accidents. But they still think they can multi task and because of their stupidity other people will be affected as well. 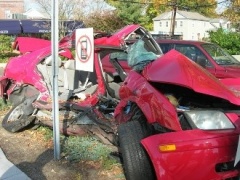 If you are a good driver it doesn’t mean that some bad driver won’t come and hit you from the back, front, left or right. So to avoid accidents everyone on the road must be a good driver.

I don’t understand what is the rush with everyone on the road. How can people be so impatient that they are willing risk their lives to avoid being late. Look at this video and see for yourself if it is really worth getting distracted while driving.

Drive safe everyone and thanks for reading my ranting.