From Sydney to Bangkok

The trip is going good so far. The flight to Sydney was 8 hours and 30 minutes and I rested well during the flight.

We got a window seat and the one next to it for our journey. When we checked in online the day before, we realised that the flight was quite full and we had someone next to us. We always wish to have a seat next to us empty so we can move freely but it had not happened for a while. So when the captain announced for the door to be closed, me and AS both were looking at each other delighted as there was no one next to us which meant that we got 3 seats to ourselves. 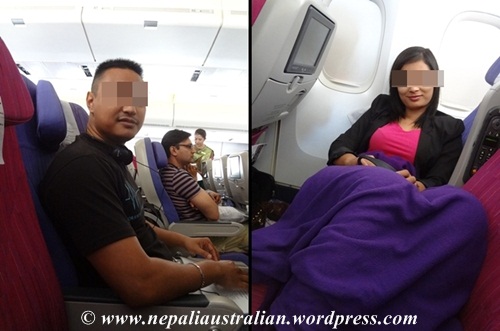 As soon as we took off, we were served lunch. Most people complain about air plane food but I am OK with it. I know it is not great but they are not bad either. We choose to eat Thai chicken curry with rice.

While having lunch, I watched the movie Bourne Legacy, which I had been thinking to watch for the while. Without Matt Demon, Bourne seems a bit weird but it was not bad.

When I finished the first movie, we still had almost 6 hours before landing. Even though we flew in the morning I was feeling very tired so I decided to sleep. Sometimes being small is an advantage as I could easily sleep on AS’s lap with my leg stretched over 2 seats. I couldn’t believe that I slept for almost 2 hours without waking up in between as it was really comfortable.

AS couldn’t sleep in the plane so he was still watching some movie when I woke up. After that I watched one more movie called Hope Spring. It was a bit slow but very educational for married people. I am glad it is too early for me and AS to be in that situation but I really hope we will be in better place in our relationship when we will be at that age married for more than 30 years. Do watch it when you get some time.

After the second movie it was only few hours before we were to land. We were served a light meal and it was noodles with prawn and some dessert. I really didn’t want to do anything else so I watched Just for Laughs for a while. I really love that show. Look at some of the great gags they have when you have time and I am sure it will make you laugh too.

Just behind our seats, there were 3 people travelling separately becoming fast friends. I know it is bad to eavesdrop but they were talking loudly so I could hear everything. One of the guy was 25, a woman 34 who is travelling international for the first time and an older man. It was nice to hear their conversation about each other and their travel plans :). They exchanged mobile numbers as well so they can hang out in Bangkok.

The flight was on time so we landed at 3pm Bangkok time. As soon as we came out of the gate, I could feel the Bangkok humidity. I was wearing my leggings and I was feeling really hot. I almost forgot how hot it was when we came here last time. Seriously even at that time, it was so hot that I had to run for the shade.

A bus took all of us to the terminal from the plane. From there we cleared immigration and took our bags were off to a taxi stand.

While waiting for our bags, I saw this sign at the Suvarnabhumi Airport which was very confusing for me. Would anyone voluntarily go via the red channel? Would you? 🙂

It took almost an hour due to traffic for us to reach our hotel. We were booked at Chateau de Bangkok. We stayed at the same hotel last time and we loved it so we booked it again.

Once in the hotel, we checked in and were happy to rest for a few minutes before changing and going out to discover Bangkok all over again.

The room was nice and clean as I remembered from last time. 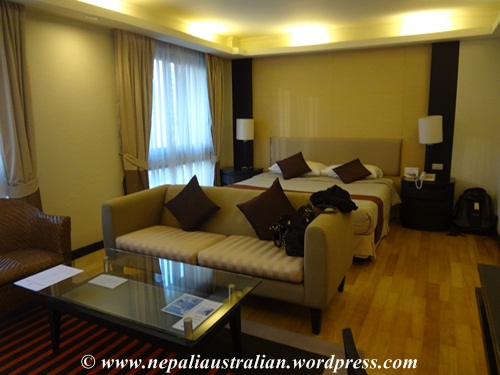 I will post more from Bangkok and Kathmandu soon.