Few Saturday ago, we went to watch the Saptapari with my girlfriends. 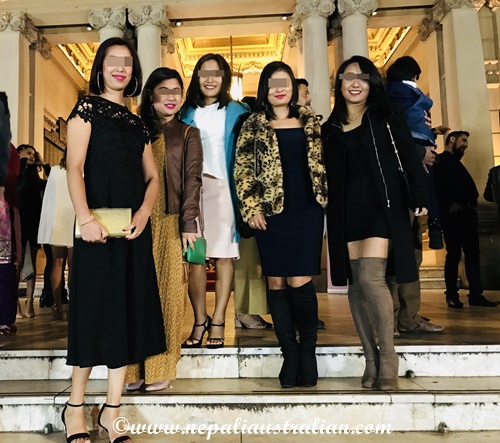 Saptapri means Seven angles and seven stars from Nepal had been invited for the show. The show was advertised as empowerment for woman and that is what attracted us to the show.

The seven angles were

They had Nepali Fashion designer Muku’s items on show as well.

The show started really well with a speech from Nepali ambassador to Australia Lucky Sherpa. I loved what she said.

Then it went to the scheduled program.

The first was dance but it was an Indian dance. We all looked at each other and went what the hell. The performer was good but that was not the point.

Anyway, the second act was a Nepali group dance and it was great. We didn’t understand why the organiser found the need to have an Indian dance as the start of the program is beyond my understanding. I’d have preferred to have the Nepali dance as the first act.

Then there was the first round of fashion show. It started with the local models and continued with the artists from Nepal. The first went for too long but I have to mention Shritst K.C who also walked the ramp which out assistance. It takes lots of courage to make sure you can do it without sight.

It was followed by a speech by Nikita Chandak. I will say it was ok but not as exceptional as I was hoping it would be. I really admire her but her speech was not as I hoped for.

It was followed by a dance by Alisha Rai, Binisha Hamal, Swastima Khadka and Barsha Raut.

They were all good but I applauded the energy we can feel when Barsha Raut was dancing.

Up next was Rajina Rimal. I didn’t know her as a singer but I have heard her songs. I loved her voice and I became a fan after the show. She was so good with the crowd and I loved the way she performed.

Definitely the highlight of the show was Shristi K.C, her inspirational speech and her amazing dance.

The program ended with another too long fashion show.

Overall, we loved the idea of a show with woman empowerment but I think the show didn’t go as per the title. There was not much about women’s empowerment apart from few speeches.

It would have been great if all the Saptapari from Nepal had spoken about how they are progressing in their life. Really, we were there to listen from inspirational women, not only to see them dance or sing. It could be any other show if it was only for dancing and singing.

Definitely, the fashion show could have been shortened as not only us, everyone around us were bored seeing the same models walking up and down the ramp so many times.

We would have also liked a good introduction of the Fashion designer, Muku and a speech from her.

Anyway we had an OK night and went to have hotpot dinner afterward.