This article was published in +977 (a Nepalese Lifestyle Magazine in Australia) in May- June 2012 issue.

If you were in Kathmandu in the mid 90’s, you must have fond memories of the time when FM (frequency modulation) radio was first introduced in Nepal. It was one of the best things that happened in that decade for people like me, who enjoyed a wide variety of music. Choosing between various music stations to listen to was a great treat and stations like Kantipur FM,HITS FM, Classic FM, and Image FM paved the path for all other FM stations to come. 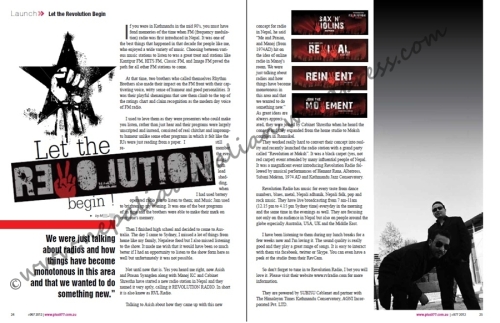 At that time, two brothers who called themselves Rhythm Brothers also made their impact on the FM front with their captivating voice, witty sense of humour and good personalities. It was their playful shenanigans that saw them climb to the top of the ratings chart and claim recognition as the modern day voice of FM radio.

I used to love them as they were presenters who could make you listen, rather than just hear and their programs were largely unscripted and instead, consisted of real chitchat and impromptu humour unlike some other programs in which it felt like the RJs were just reading from a paper.  I still remember the evenings with load shedding, when I had used battery operated radio just to listen to them; and Music Jam used to brighten up my evening. It was one of the best programs of its time and the brothers were able to make their mark on everyone’s memory.

Then I finished high school and decided to come to Australia. The day I came to Sydney, I missed a lot of things from home like my family, Nepalese food but I also missed listening to the show. It made me wish that it would have been so much better if I had an opportunity to listen to the show from here as well but unfortunately it was not possible.

Not until now that is. Yes you heard me right, now Asish and Prasan Syangden along with Manoj KC and Cabinet Shrestha have started a new radio station in Nepal and they named it very aptly, calling it REVOLUTION RADIO. In short it is also know as RVL Radio.

Talking to Asish about how they came up with this new concept for radio in Nepal, he said “Me and Prasan, and Manoj (from 1974AD) hit on the idea of online radio in Manoj’s room. We were just talking about radios and how things have become monotonous in this area and that we wanted to do something new.” As great ideas are always appreciated, they were joined by Cabinet Shrestha when he heard the concept and they expanded form the home studio to Moksh complex in Jhamsikel.

They worked really hard to convert their concept into reality and recently launched the radio station with a grand party called “Revolution at Moksh”. It was a black carpet (yes, not red carpet) event attended by many influential people of Nepal. It was a magnificent event introducing Revolution Radio followed by musical performances of Hemant Rana, Albatross, Subani Moktan, 1974 AD and Kathmandu Jazz Conservatory.

Revolution Radio has music for every taste from dance numbers, blues, metal, Nepali adhunik, Nepali folk, pop and rock music. They have live broadcasting from 7 am-11 am (12.15 pm to 4.15 pm Sydney time) everyday in the morning and the same time in the evenings as well. They are focusing not only on the audience in Nepal but also on people around the globe especially Australia,USA,UK and the Middle East.

I have been listening to them during my lunch breaks for a few weeks now and I’m loving it. The sound quality is really good and they play a great range of songs. It is easy to interact with them via Facebook, twitter or Skype. You can even have a peek at the studio from their RevCam.

The voices behind the revolution radio are:

So don’t forget to tune in to Revolution Radio, I bet you will love it. Please visit their website www.rvlradio.com for more information.

They are powered by SUBISU Cablenet and partner with The Himalayan Times Kathmandu Conservatory, AGNI Incorporated Pvt.LTD.