Our trip to New Zealand: Wanaka

While we were in New Zealand, we rented a car and decided to go for a drive. Our first stop was Wanaka.

Wanaka is a town in the Otago region of the South Island of New Zealand. It is situated at the southern end of Lake Wanaka, adjacent to the outflow of the lake to the Clutha River. It is the gateway to Mount Aspiring National Park.

Wanaka is just over an hour’s drive from Queenstown and it’s simply stunning. Driving over the hills on he winding mountain route – Crown Range Road – via Cardrona will take you on the steepest gradient on a highway in NZ. It was really scary as the road was zigzag and you could not see anything coming from the other side. I think I would not have gone that way if I had known that the road was so dangerous because to drive on that road , not only do you need to drive carefully but you pray that anyone coming from the other side is awake and careful as well.

But the drive was worth the trouble as on the top of the hills, we saw snow. We parked the car and it was really windy but we still managed to walk for a while and enjoy the place before running back to the car. 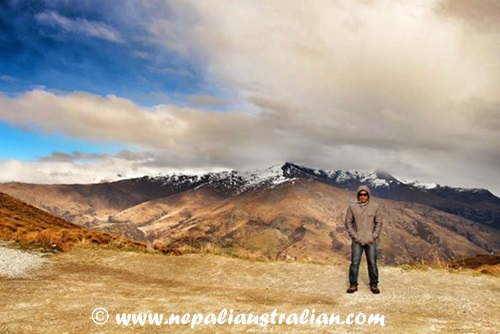 After that we drove by some beautiful small farms and ended up on the shores of Lake Wanaka at a lakeside cafe and just sat and enjoyed the view.

Lake Wanaka is not as deep as Lake Wakatipu in Queenstown so it is possible to swim in it during summer without freezing your bits off. There are a number of ways to enjoy the lake with a host of kayaking and boating options available. We just decided to walk around and enjoy the place though before deciding to go for lunch.

We were not sure what to eat and finally found a nice Korean place where we enjoyed noodle soup and stir-fried chicken.

After lunch we drove to The Anzac Memorial Cenotaph which is a very short quick drive from town.

From here we saw the marvellous view beyond the town and straight down the lake. 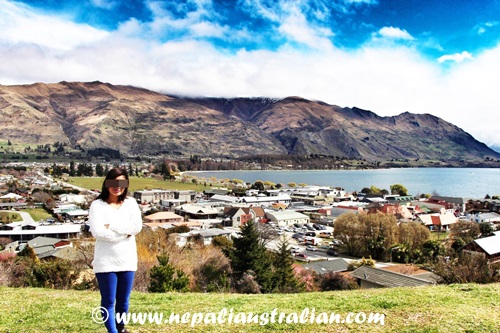 We spent some time there and made our way to the Puzzling World.

Stuart Landsborough’s Puzzling World is a tourist attraction near Wanaka, New Zealand. It started out as just a single level maze in 1973, but over the years expanded to add overbridges to the maze design (thus creating the world’s first 3-D maze), a large “puzzling café” where guests can try out several puzzles, five large rooms of optical illusions, the Leaning Tower of Wanaka (which has a backwards clock that was started on the eve of the new millennium) and other attractions (such as the Roman Bathrooms) that ascribe to their theme of “puzzling eccentricity”.

We took some fun photos there. From there we drove to Cromwell, more on it in next post.