If a place manages to amaze you when you see it after a 14 hours flight and 28 hours with no sleep then I am sure that is an amazing place and that is what Dubai was for me. When we got off at Dubai International Airport, we could already feel that we were in Dubai as it was very big and massive as we had expected. The first thing I noticed was that the people who were working there were all men and all of them were wearing their traditional dress, tawb or taub (long white robe) and the headscarf (keffiyeh). 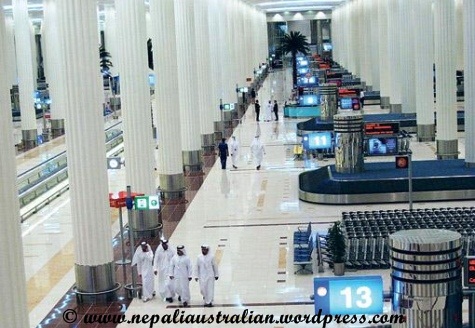 I think quite a few flights landed at the same time as we did since there was a long queue at immigrations. So we had to wait for a while before we could clear immigration and collect our baggage. Both me and AS were really happy to start the first leg of our vacation.  As soon as we got out of the airport, I felt the hot and humid air against my face. I knew that it was going to be really hot there but it was still a bit of a shock for my body as we had come from the cold Sydney weather. Anyway as we had airport transfer booked, we went to find the office of Arabian Adventures. It was the last office in the building.

Once we were there we were informed that it would be another 20 minute for our transfer to arrive. We had no choice but to wait. After 30 minutes we were escorted to our van and we were joined by a lady from Sydney. I was glad to be in the van as it had AC and was very comfortable. I noticed that they had taxis with a cream coloured body and red roof for normal use and cream body and pink roof to be used by only women. The drivers of those cabs were women as well. After nearly 20 minutes ride we were at our hotel, Marco Polo.

We had done a lot a of research for our hotel through travel advisor and it was one of the ones with a good review. It was supposed to be a four star hotel. My first impression was good as the hotel looked decent from outside. As soon as the van stopped, the porter came and took our suitcases. We checked into our room and hurried to freshen up to go out.

SS, a friend of mine from my school days, lives in Dubai and since it was Friday, their weekend, he had promised to show us Dubai. Due to the airport transfer delay , we were late arriving at the hotel so both of us were rushing to get ready before SS arrived at out hotel. When I had just finished my shower, we got a call from the reception that SS has arrived. I and AS were really tired but there was no time to rest so we hurried and got ready and went to meet SS.

I hadn’t seen SS for more than 15 years. When we decided to stop over in Dubai for our trip, I had some questions so when I saw him online on Facebook one day I asked him a few questions. He had asked me when we were coming to Dubai and when he realised that it would be Friday, he had offered to show us around that evening.

When we took the lift to the lobby and I saw SS, I felt very happy but at the same time it was a bit awkward. He seemed a bit different from I remembered and definitely was not a boy as I remembered. But all the awkwardness went away once we started talking, I realised that nothing had changed. It still felt like we were in school and we were still friends :). He told me he has been working in Dubai for the last eight years but his wife and two-year old boy is still in Nepal and he visited them every year. Along with him, he had his colleague, Mr. R. He was from Kerala, India and he had been living in Dubai for 15 years. They worked in the perfume industry and brought us some perfume as gifts :). 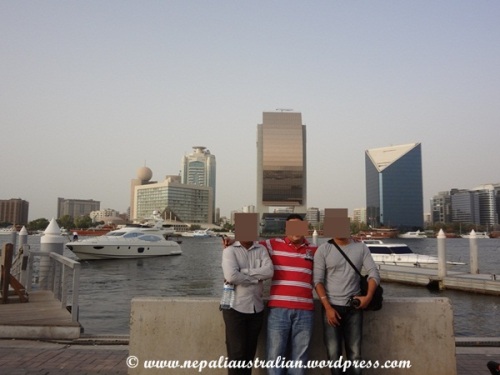 Mr. R, SS and AS in front of Deira creek

After the initial chitchat and introduction, we hopped into the car and we were off to see Dubai with the locals. Both of them seemed happy to show us around and we were excited to see the city despite being quite tired from the flight. The hotel we stayed was in Deira so the first stop was Deira Creek. There were lots of people enjoying the cool breeze at that time and obviously lots of tourist too. We could see the beautiful skyline from there as well as hundreds of boats. Some of them were for tourists, for sightseeing, while other were floating restaurants but the best and biggest ones were private boats docked there.

Out of the total population of Dubai only 17% are local Emiratis (from Wikipedia) while the rest are all migrants. So the small number of people are very rich and live a lavish life style. They drive nice cars like Ferrari, Lamborghini, Bentley, Rolls Royce, BMW, Mercedes Benz and so on. Also they seem to love big four wheelers. SS explained to us that the number plates in Dubai normally have 5 digits but the less number of digits there are on the plate, the more important the person that car belongs to. The Sheik of Dubai drives a car with just the number 1 on the plates. 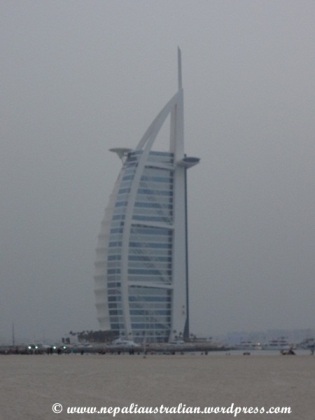 After walking for a while along the banks of the creek, we were back in the car and off to the famous Jumeirah beach from where we could see the famous Burj Al Arab which is sometimes incorrectly referred to as “the world’s only seven-Star hotel”. Tourists were able to pay and join organised tours of the hotel before but the hotel patrons complained about the noise and inconvenience so they stopped the tours. Now the only way to go inside is either by booking a room there or going for a meal in one of the restaurants located there, otherwise it can only be viewed from the outside.

While we were driving to get there, I saw that the roads in Dubai are very wide and there are lots of cars. The best part was that petrol was only 42 cents a litre while water is 50 cents a litre. Anyways, we parked near Jumeirah beach, near a mosque. As it was evening prayer time, there were lots of people heading towards the mosque wearing traditional Muslim clothes.

As we walked for a few minutes, I could see the iconic Burj Al Arab. It looked magnificent. Just recently I had watched a documentary on how the building was made on the man-made island and knowing those facts made it even more interesting. According to the documentary, they used special bolt technique for the metal poles so even when it expands in the 40-50 degree heat, it doesn’t affect the structural integrity of the building. I was really fascinated by it and if you want to know more do look into this.

AS and me in front of Bruj Al Arab

Here are some facts about Burj Al Arab from the internet.

We took photos in front of it and stayed on the beach for a while. That is one of the few free public beaches in Dubai. There are a few where you need to pay to go inside and the rest are private, either owned by people or some hotel. I saw a lot of families having a BBQ on the beach. Life seemed happy and normal as I sat on the sand and watched the locals enjoy their day off. I am saying this because I got lots of warnings from people on what not to do in Dubai and at one point it had scared me. But sitting by the beach with my husband and friends, I felt happy and I had no worries in the world.

As we had booked to go to the top of Burj Khalifa at 10 pm that night our next stop was going to be Dubai mall. We decided that we were going to have dinner there as well so we hopped into the car for Dubai mall.

The Dubai Mall is the world’s largest shopping mall based on total area. It has 1200 shops and is located in the Burj Khalifa complex. The mall also has Dubai Aquarium, Under Water Zoo and Dubai Ice Rink.

On the way to the mall, when I set my eyes on  Burj Khalifa for the first time, I was mesmerised by its beauty. They were just magnificent and I was more impressed as I had watched Mission Impossible Ghost Protocol. There was lots of traffic going towards the mall and the journey that was normally supposed to take 20 minutes took an hour for us. Mr R dropped us in front of the mall and went looking for parking as he didn’t want us to miss the musical fountain. It was really nice of both of them to make sure that we enjoyed as much as we could while we were there.

I have seen the musical fountain in Vegas but this one seemed bigger than that. I really enjoyed the show with Khalifa as the background. After that we went to catch a bite and then it was time for us to go up to see Dubai from Top Of The World.

Our plan was for SS and Mr R to leave us there and we meant to catch a cab back to the hotel but they insisted on waiting for us to take us back themselves. In those short few hours I was touched by their hospitality and kindness many times.

Me in front of Candylicious with M & M

We left them in the mall and went up to see Dubai from the top. It took us more than an hour to finish the tour. We meet SS and Mr. R again and were planning to go back to hotel. Both AS and I were dead tired by then but SS and Mr. R were planning to show more of Dubai that night and made plans to show us more of the Dubai mall. We felt obliged and went to see one of the souk inside the mall as well as the Dubai Mall Aquarium and dropped into Candylicious, the world’s largest candy store.

AS and in front of Dubai mall aquarium

I was really impressed by the way Dubai was planned and made. Definitely one of the grandest places I have ever seen. After another hour of wandering around Dubai mall it was past midnight and they dropped us back to the hotel.

By the time we hit the bed it was past 1 am Dubai time which was 7 am Sydney time and we hadn’t slept since 3am the day before. It makes 28 hours of non stop travel and sightseeing 🙂

When I was trying to sleep, I could hear music coming from the disco located on the first floor of the hotel. I had read about that in the review of the hotel but as I was so tired it didn’t bother me and the next second I was fast asleep and didn’t wake up until 8 am the next morning.

Despite lack of sleep and tiredness, I was already in love with Dubai and it was just day one there.

I will be writing more about my trip, hope you will still be interested. :-). Please click here for more photos.