Dubai Mall as you have already heard is one of the biggest shopping centres in Dubai. While we were in Dubai, we went there almost every day. As I mentioned in my previous post, it was one of the coolest places in Dubai so we went back again to see the mall by day even though we had seen it the first night we were there.

For me it was like being in heaven. There was an array of shops everywhere I looked. There were high end shops like LV, Dior, Channel, Burberry, Versace , Armani and how can I forget the towering shoes in Jimmy Choo. Also there were shops like Zara , Forever 21 as well. There are over 1200 stores and one can only dream how long it would take to go to every shop there. The mall itself is split into 5 unique themed areas, circling the gold souk located in the centre which is intuitive to navigate. 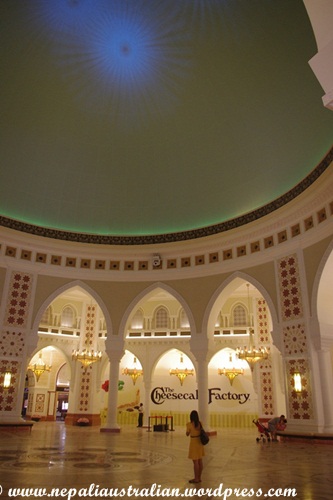 We went to some of the shops and did some shopping. The mall seems so big and once you start walking you surely feel it in your legs. I was really excited that I was in a place which is considered as the shopping Mecca of the world. I hurried from one shop to another buying a few shoes and jewelleries. But after walking for a few hours , I was so tired that  for the first time in my life I was sick of shopping and told my husband I was ready to stop shopping and do something else. My husband was so surprised that I got tired of shopping. He thought he would never hear that in his life time. 🙂 So we decided to stop in one of the coffee shops to have a cake and coffee and rest our legs. As I was seriously over shopping by that time we decided to go to see the aquarium again. On the way to the aquarium we stopped at the gold souk. It has an Arabian market theme selling everything gold. It has a nice relaxing environment. 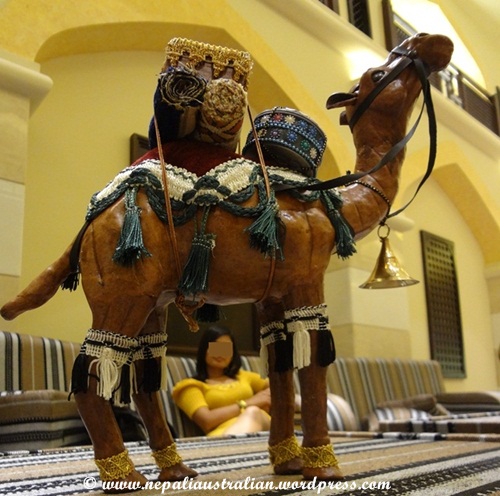 Once we were in the aquarium, we took some more photos. It was similar to Sydney’s Aquarium and literally just a huge rectangular fish tank and an underwater tunnel similar to the one in Sydney. The tunnel goes under the aquarium and you can see reef sharks, large schools of fish and even a whale shark. The tank is themed to a shipwreck with several man-made barnacle ridden structures seen around the tank, giving it a rather weathered look. 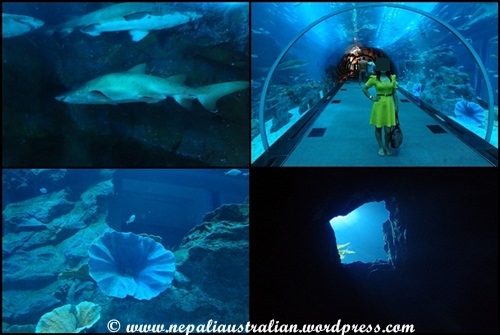 At the exit of the tunnel there is a rainforest café. It looked cool but we didn’t go inside. From there we went to second part of the zoo which is in the third floor. 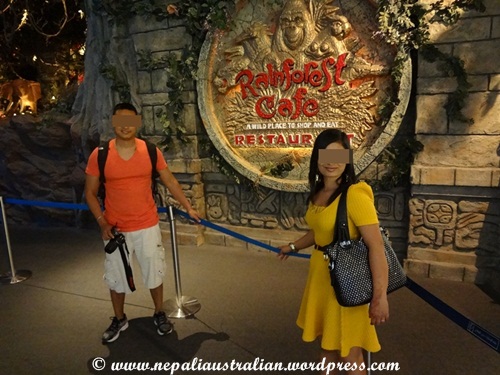 As soon as we enter the underwater zoo, it follows a rather linear route winding through the exhibits and passing through many tanks of fishes before moving onto the next. There are many kinds of fishes like piranhas and even playful otters. There were also some fishes native to the Amazon as well as south east Asia. There was a shark tank comprising of small reef sharks, jellyfishes which glow under synthetic florescent lighting as well as a few relatively exotic crustaceans such as Alaskan crabs. The deep sea areas of the zoo are nicely themed with waterfalls and fiberglass cave walls, giving it a subterranean atmosphere.

Following the route, we eventually came to the bug section called creepy crawly where we could see scorpions and tarantulas and in the reptile section of the zoo where there were display of some lizards and snakes. There was also a mini suspension bridge made of rope up there which forms the rainforest “canopy walk” part of the park, allowing you to have an overview of the rainforest portions of the park. One of the best parts of the zoo was watching the penguins exhibit. After the tour of the underwater zoo we went to another part of the mall. 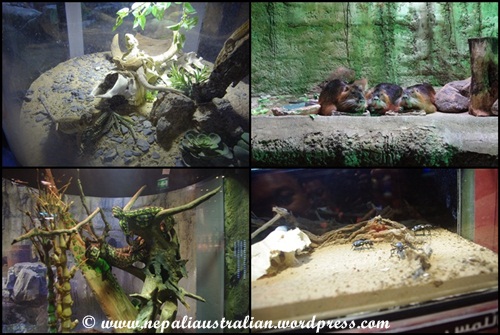 There is a large multipurpose ice rink called the Dubai Ice Rink in one atrium of the mall. It is used for ice hockey matches as well as a skating or public ice-skating rink. The ice is very smooth and resurfaced daily. There was some practice session going on while we were there so we didn’t get a chance to go inside the rink.

I am sure people can easily spend a whole day shopping or going through different things at the Dubai Mall. It’s a good thing that despite the entire lush luxuriousness  which surrounds the theme of the Dubai Mall, most of the stores there still cater to the masses and a wide range of consumer budget. I will definitely go back to the mall when I visit Dubai again.