Chhori’s visit to the Zoo in Nepal

The last time we went to zoo was when we went to Nepal with my then 6 months nephew. This time we wanted to take the little girls, Chhori and our niece, there.

The zoo is located a few kilometres away from the city centre, Kathmandu. It is the only zoo in Nepal but there has been about talk about opening another zoo somewhere else as well. 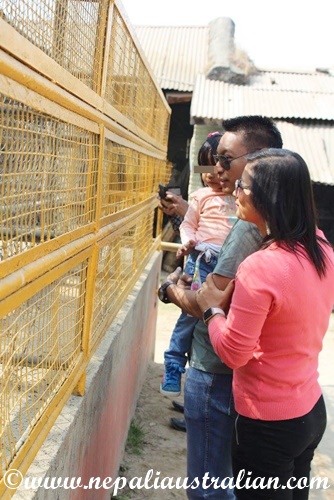 We went there with AS’s mum, his two brothers, sister in law and niece. We really wanted the girls to have a good time. As it was Saturday afternoon, as expected the zoo was busy with many families coming for an afternoon out. It was a warm sunny day which was great. 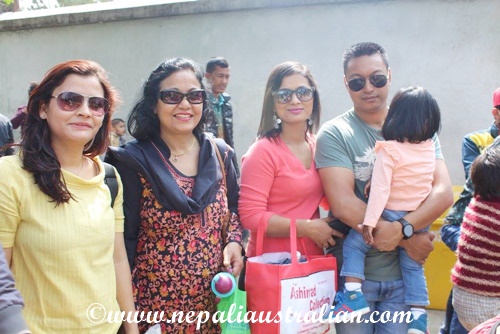 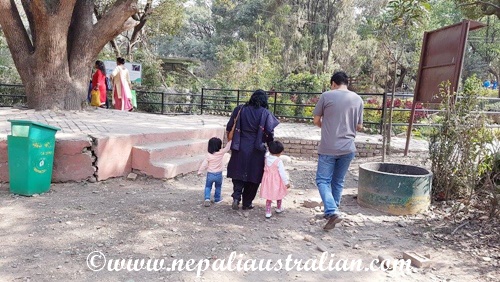 The zoo is arranged according to taxonomy, with mammals, birds, reptiles and fishes all occupying different parts of the zoo. There are also playground rides, picnic lawns and boat rides on the lake. 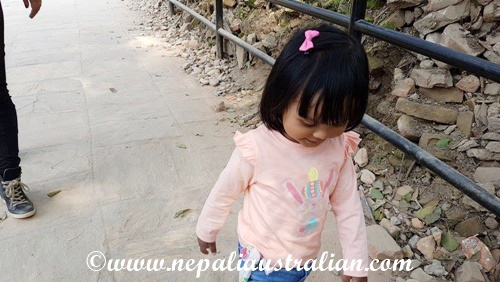 Along with these animals, there was a hippo that was lazily sunbathing, a hyena, a giant deer, peacocks, white-napped crane, two big rhinos, monkeys, water buffalo, chimpanzees, leopards, bear, tigers, lions as well as golden pheasants, silver pheasants, chukar, kalij, parrots, owls. They also had a small reptile collection which featured a common cobra, an Indian rock python, snakes and a turtle. 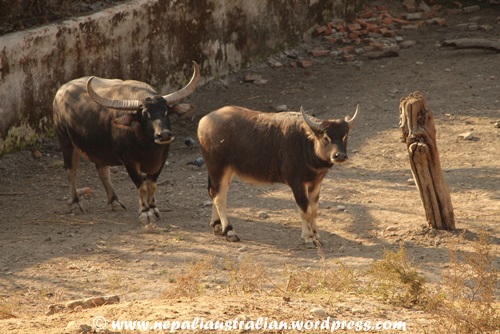 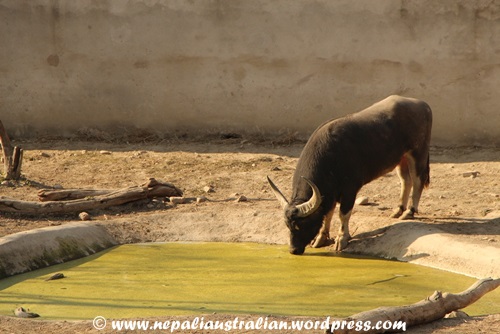 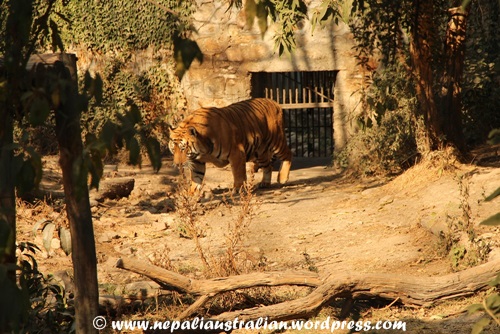 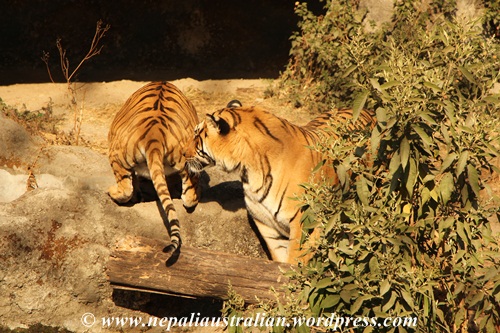 As we walked from one enclosure to another, I could see the girls’ excitement. They would make noises of the animals that we saw or count the birds. 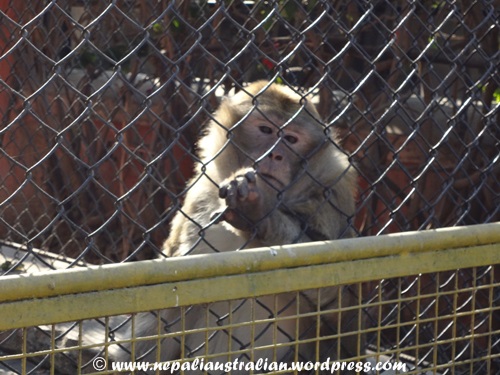 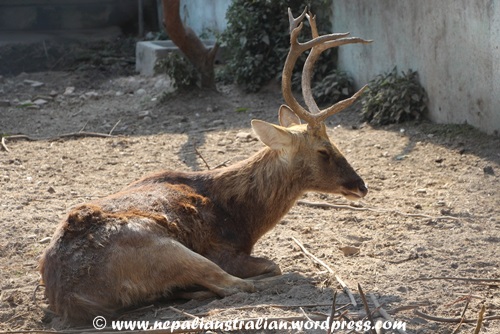 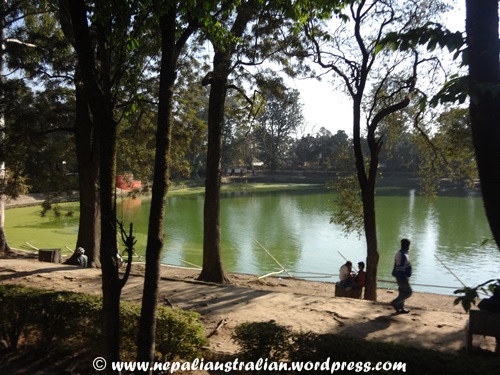 Chhori loves to look at real animals as she can hear them make noises and she gets really excited. I am so glad that she got time to spend with our families in Nepal and the girls did bond well despite fighting from time to time. 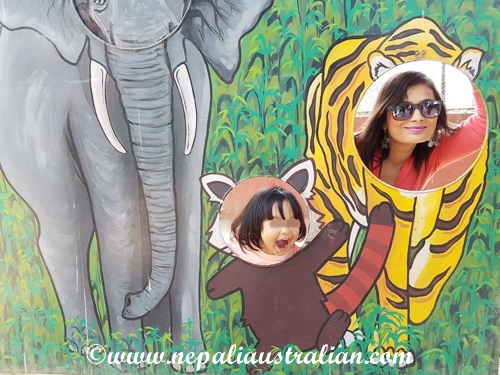 After the whole tour of the zoo, we were all tired so decided to go to a nearby restaurant for our favorite momo and Nepali food.

I have mentioned before that Chhori loves momo and she was over the moon in Nepal getting to eat so many times. In one occasion, she surprised us all by eating 8 momos in one sitting.  I guess she is showing us her Nepali side.  🙂

I hope everyone is having a great week. Take care till next time.

I hadn’t been to the zoo in Kathmandu for more than a decade but this time we were lucky that we had time enough to visit the zoo. The zoo is located a few kilometres away from the city centre, Kathmandu. It is the only zoo in Nepal, a country with a population of 30 million, and hence fulfils an important role.

We hadn’t planned to there. We were out for lunch with my parents, my brother, SIL and little nephew. As we were close to the zoo, my dad suggested that we should go and visit it so that my little nephew could have some fun and all of us agreed to it. 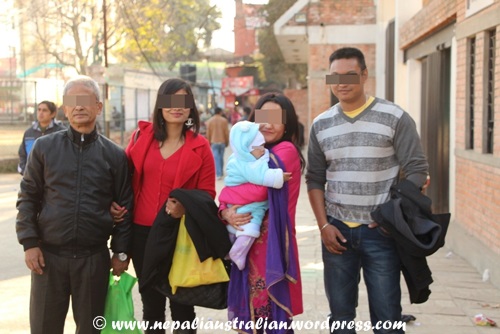 I remember around 3 years ago, me and AS wanted to go to the zoo. We were outside the gate and we saw so many people that it put us off from going inside. But I am glad we went this time.

As we walked inside, I realised nothing much had changed in the last decade, which is very sad.

The animal enclosures are arranged around the perimeter of a large boating lake which takes up a large proportion of the zoo’s area.

As we started of tour, we saw an elephant riding area. My dad wanted my nephew to have his first elephant ride so we went and asked the guys there for more information. They said there are a few groups already booked for the tour so asked us to buy the ticket and come back in an hour. 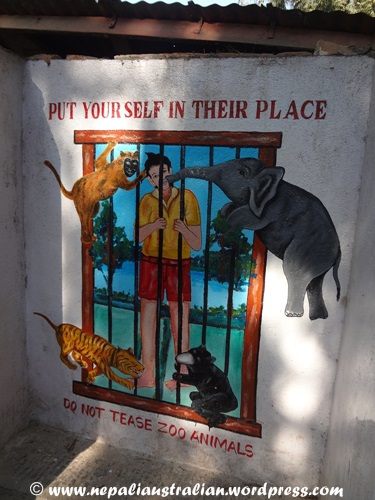 The elephant ride cost us RS 100 each for around 15 minutes ride. So after buying the tickets we continued our tour. 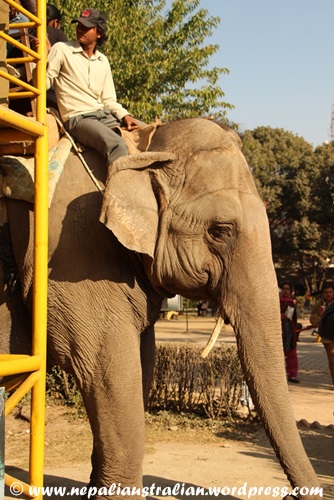 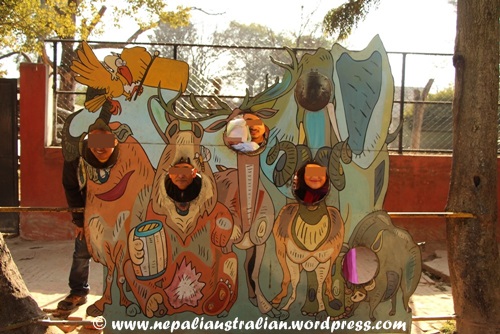 The zoo is arranged according to taxonomy, with mammals, birds, reptiles and fishes all occupying different parts of the zoo. There are also playground rides, picnic lawns and boat rides on the lake. As we started walking around the zoo, I realised that there were lots of families with small kids enjoying their picnic as well as many lovebirds in corner benches enjoying their time together away from prying eyes. 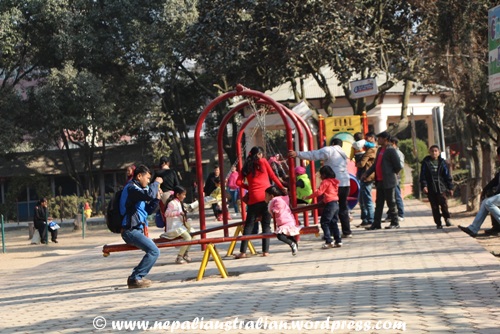 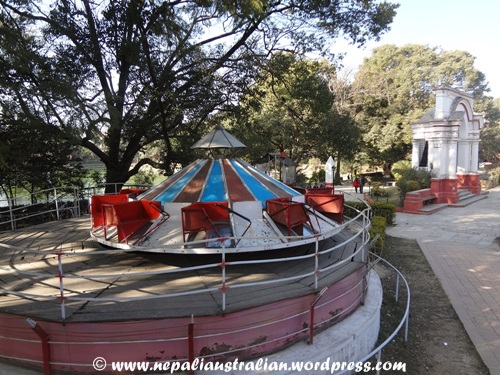 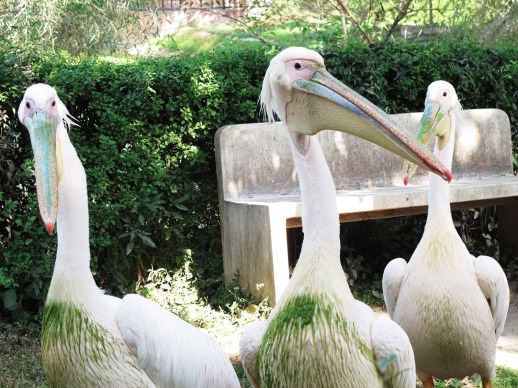 By the time we had a look around; it was almost our turn to ride the elephant so we went back to the riding area. We waited for 10 minutes and it was our turn. 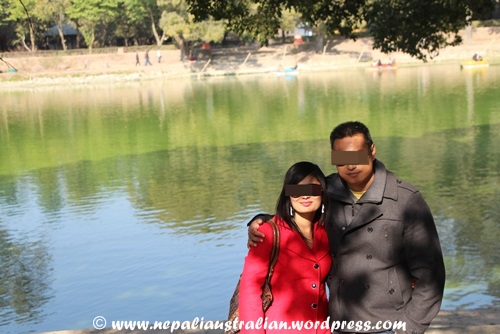 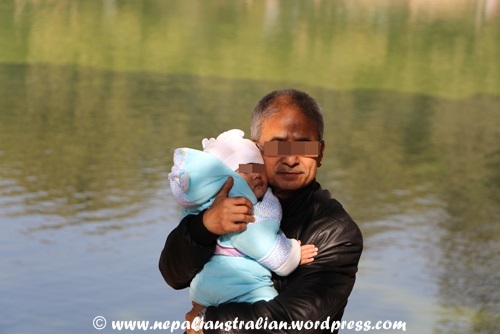 The guy told us it is OK for all of us to ride at the same time (poor elephant) so me, AS, my dad, my brother, SIL and my nephew got on the top of this elephant. I was glad that my nephew enjoyed the ride. 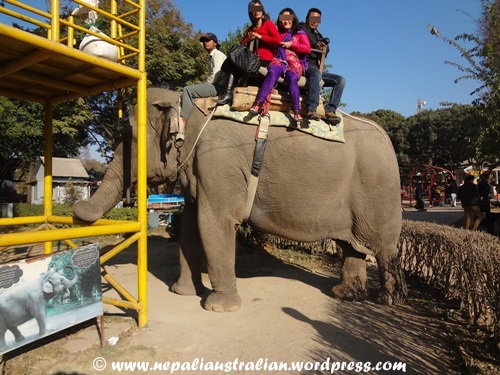 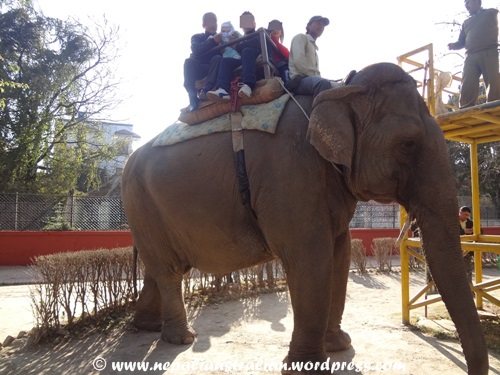 Initially, the elephant was not listening to its handler and I was a bit scared as he was not moving according to the pre-planned route but after a while he relented and followed the route. While talking to the handler, he told us that the elephant is round 70 years old and does 8-10 trips every day. I felt sorry for the poor animal as he is so old and has to do this every day.

We were taken half way around the lake and then back to the same spot where we got on it. For some reason my nephew started to cry, poor baby. We were all glad when we get off as we were worried if something might have happened to him. But he was fine, just restless as he had to sit in one place too long. By this time it was getting cold and windy so we decided to go home.

I had a really nice time with my family and was happy to see my nephew have his first elephant ride.

Even though the zoo in Nepal is small but it is well maintained I am sure it is a great place for kids to visit to learn more about different animals. Construction was going on everywhere so it looks like it is in the process of a face lift with new paths and enclosures so I think in a few years it will be quite lovely.