I know I blog about Prabal Gurung a lot but I just love him and his designs. I have written about him before here, here and here. There are so many good things happening in his life that I am glad that I can write so much about him.

As I told you before, one of my dreams is to wear his design and I really hope it will happen one day.

Yesterday, Duchess of Cambridge, Kate Middleton was spotted wearing a Prabal Gurung dress for the State Dinner hosted by the President of Singapore, Tony Tan Keng Yam, at his residence, the Istana. She looked great in electric purple print dress, a modified version of a catwalk look from Gurung’s spring 2012 collection.

Prabal Gurung was born in Singapore and raised in Kathmandu, Nepal.

Here are links to the media talking about Kate wearing Prabal Gurung in USA , UK and Australia.

Recently he was also featured in Time Magazine in a section called 10 Questions. Here is the article. 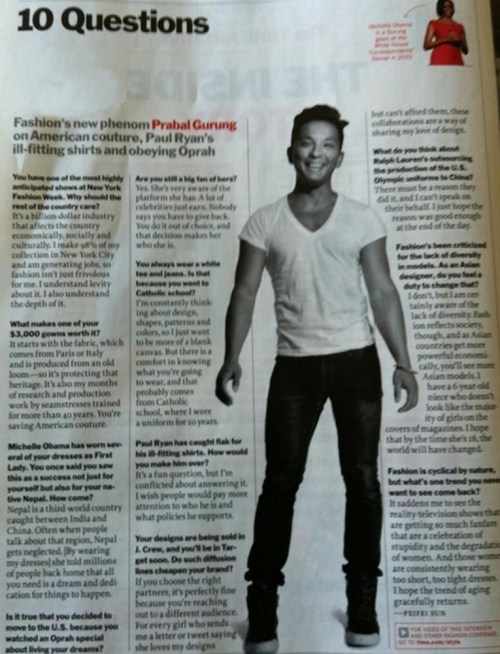 You have one of the most highly anticipated shows at New York Fashion Week. Why should the rest of the country care?

It’s a billion-dollar industry that affects the country economically, socially and culturally. I make 98% of my collection in New York City and am generating jobs, so fashion isn’t just frivolous for me. I understand levity about it. I also understand the depth of it.

It starts with the fabric, which comes from Paris or Italy and is produced from an old loom–so it’s protecting that heritage. It’s also my months of research and production work by seamstresses trained for more than 40 years. You’re saving American couture.

Michelle Obama has worn several of your dresses as First Lady. You once said you saw this as a success not just for yourself but also for your native Nepal. How come?

Nepal is a third world country caught between India and China. Often when people talk about that region. Nepal gets neglected. [By wearing my dresses] she told millions of people back home that all you need is a dream and dedication for things to happen.

Is it true that you decided to move to the U.S. because you watched an Oprah special about living you dreams? Are you still a big fan of hers?

Yes, she’s very aware of the platform she has. A lot of celebrities just earn. Nobody says you have to give back. You do it out of choice and that decision makes her who she is.

You always wear a white tee and jeans. Is that because you went to Catholic school?

I am constantly thinking about design, shapes, patterns and colours, so I just want to be more of a blank canvas. But there is a comfort in knowing what you’re going to wear and that probably comes from catholic school, where I wore a uniform for 10 years.

Paul Ryan has caught flak for his ill-fitting shirts. How would you make him over?

It’s a fun question, but I ‘m conflicted about answering it. I wish people would pay more attention to who he is and what policies he supports.

Your designs are being sold in J. Crew and you’ll be in Target soon. Do such diffusion lines cheapen your brand?

If you choose the right partners, it’s perfectly fine because you’re reaching out to a different audience. For every girl who sends me a letter or tweet saying she loves my designs but can’t afford them, these collaborations area a way of sharing my love of designs.

What do you think about Ralph Lauren’s outsourcing the production of the U.S. Olympics uniform to China?

There must be a reason they did it. I can’t speak on their behalf. I just hope the reason was good enough at the end of the day.

Fashion’s been criticised for the lack of diversity. As an Asian designer, do you feel a duty to change that?

I don’t but I am certainly aware of the lack of diversity. Fashion reflects society, though and an Asian countries get more powerful economically, you‘ll see more Asian models. I have a 6 year old niece who doesn’t look like the majority of girls on the covers of magazines. I hope that by the time she’s 16, the world will have changed.

Fashion is cyclical by nature but what’s one trend you never want to see to come back?

It saddens me to see the reality television shows that are getting so much fanfare that are a celebration of stupidity and the degradation of women. And those women are consistently wearing too short, too tight dresses. I hope the trend of aging gracefully returns.

How can you not fall in love with this lovely human being who has done so much in fashion as well as for Nepal.

18 responses to “Love you, Prabal Gurung”