I guess it is correct when they say age is just a number. I am getting older but I don’t feel any different than what I felt 5 years ago. As the birthday passes every year, I have not started to feel older yet.

Any way, 28 October, Saturday was my birthday and I had 3 days of celebration, thanks to my friends and family.

On Friday, we had organized a girls’ night out with a few of my friends. It was so much fun with 11 girls going out for dinner, drinks and dance. As our better half looked after our kids at home, we met up in the city and went to Pancake on the Rocks for dinner.

The dinner went well with lots of fun and laughter. The food was good and the company was the best and it was a great start to the night.

There was one moment when two kids came out from the bathroom with their mum and all the mums in our group were looking at them and thinking about their own kids. I guess we can never stop being a mum in our hearts no matter where we are. 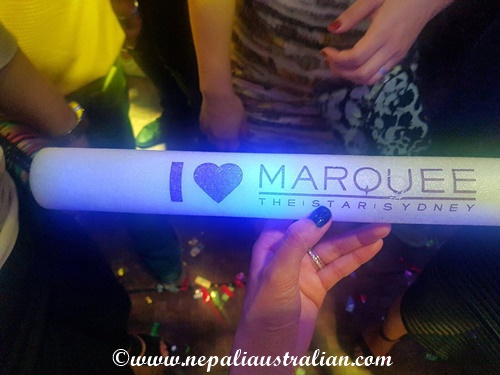 After dinner, we went to Marquee night club for their Zoo night. It was advertised as “Sydney just got wilder… with glamorous dancers, tons of confetti, blasts of CO2, suspended jungle vines and golden animals, Marquee Zoo has arrived. The new face of Friday nights at Marquee, Zoo features pumping party music you can get down and dirty to, coupled with a crazy party atmosphere unlike anywhere else in the city.”

We were all excited for the night and were at the venue by 10pm. When we arrived, there were not many people at the club so we started the night with a few shots of tequila.

The girls even sang “Happy Birthday” for me at midnight which was just sweet.

We danced till 2pm and then decided to go home. We caught Uber home and I was home by 2:40am. I think it has been more than 5 years since I have had this big a night out.

When I was home, I was expecting Chhori and AS to be in bed but to my surprise, AS was still awake and working on the decoration for our party on Saturday night. The feature wall was coming along nicely and I was so impressed. I am sure his engineering skills was put to good use 🙂

I stayed awake for another hour and we went to bed and it was almost 4am.

At 6:30, I could hear Chhori wake up and go to the lounge room. I tried to ignore her for a while and get back to sleep but couldn’t for long so I went out too. She was so excited to see the wall decoration. She said “Happy Birthday Mama.” She has been saying that for a week now every day.

She has been saying to everyone who listens to her, “We are having a Halloween party. I am a witch and mama is a witch and papa is a skeleton.” In a sweet little voice. It was so good to see her so excited.

I let AS sleep for a while and after breakfast, started preparing for the party. It was nice to receive calls, messages and posts from family and friends wishing me on my birthday.

AS woke up and continued with the decoration for a while as I prepared special food like witches fingers and spider eggs. The biggest task was to pull off this special Brain cake. 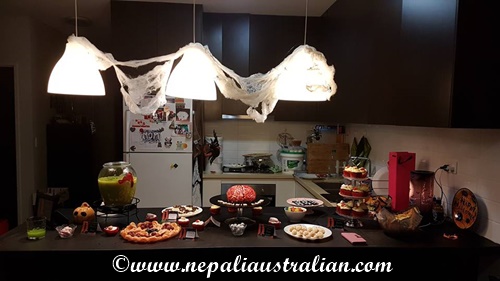 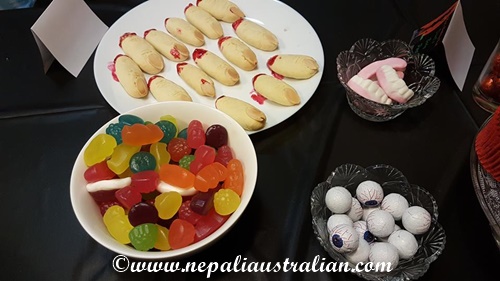 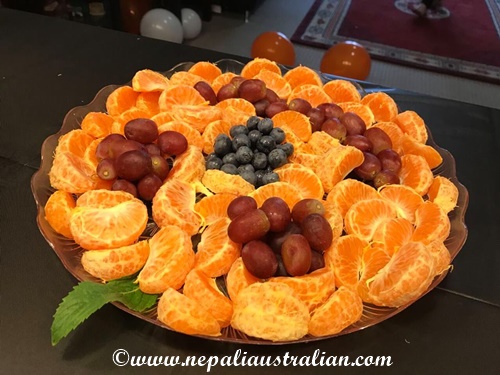 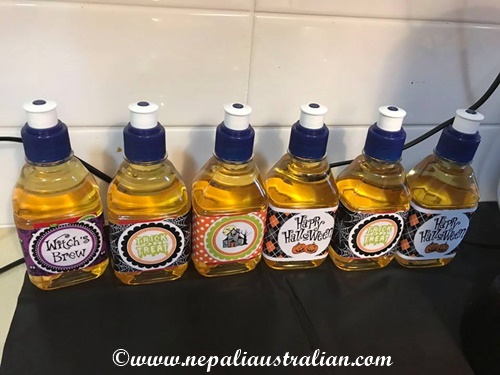 While looking for Halloween cake ideas, AS came up with this idea for a Brain cake, which took some convincing on his part. I was not too sure at first but I am just glad we did it. We were super excited when the cake came to life at the end. It was hard work on both our sides but it was worth it. I will post a step by step on how we did it on my next post.

Then AS made the drink and by the time everything was ready the guests started to arrive. 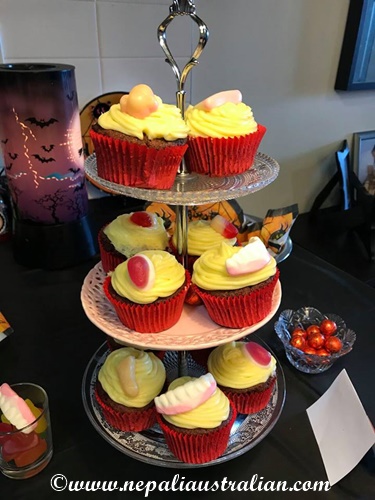 We got dressed , Me and Chhori as witches and AS as skeleton. 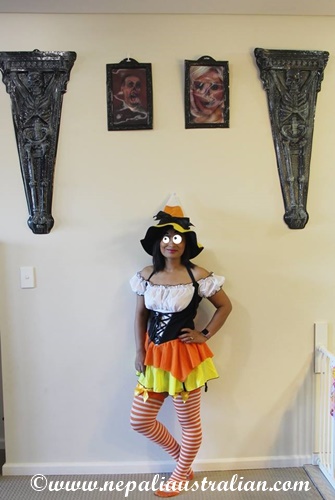 Our guests were all dressed in different outfit like nuns, pirates, skeletons, devils, vampires and so on and our apartment was looked like one cool place. 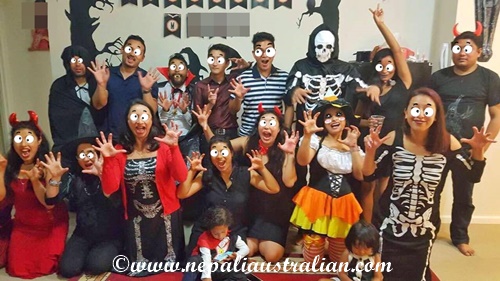 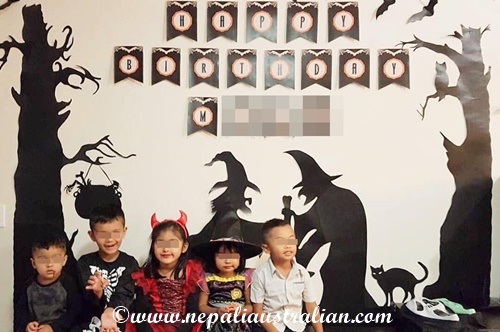 Everyone was impressed by the decorations and the cake and everything else so it was really great. I am so glad that all the effort AS made with the decoration was so great that whole night everyone was talking about it.

After the entrée, we had a few games planned for the children and adults and it went well. Everyone enjoyed it and had fun and took heaps of photos.

Then it was dinner time and the special moment where I cut the cake. I was expecting people to gross out over the cake but everyone was excited, especially the kids with the cake. 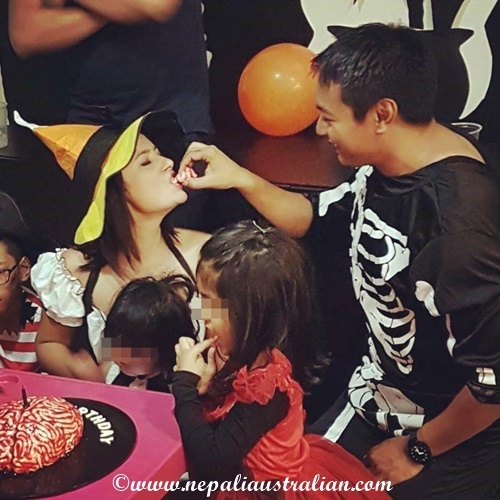 We had a great party and it was definitely a success looking at everyone’s reaction.

Decorations were already done and making the cake was easier this time around. 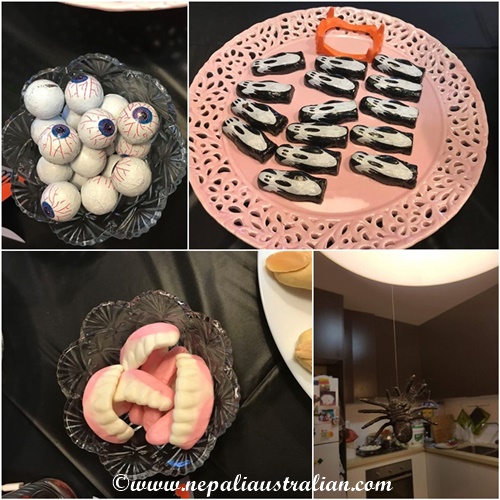 All the guests were dressed up this time as well and we had fun. By the time, the last guest left on Sunday, we were so tired that we went to bed straight away. 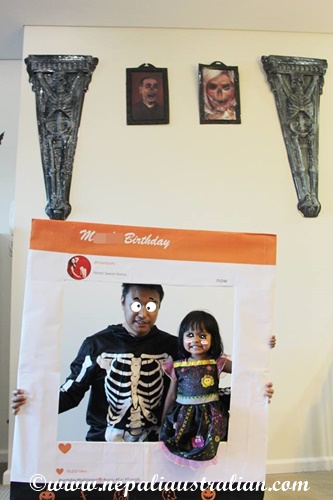 Having late night for 3 days in a row was not a great idea but I had an awesome weekend for my birthday. I feel so blessed to have AS in my life who made sure I had a great time and all my friends and family who were there for me.

Something really embarrassing and funny happened this morning and it made me laugh so hard. I though of sharing that with you all.

This morning one of my colleagues who live in the same building as I do called me and wished me ‘Happy Birthday’. I thought he was joking and told him that it was not my birthday. As you know, my birthday was on 28 October so it is nowhere near that right now. Then he said, it must have been yesterday or the day before so ‘Happy belated Birthday’.  I was not sure why he was insisting that it was my birthday so I had to tell him that my birthday was 3 months ago.

There was a bit of silence on the phone as I think he was a bit embarrassed that he got it all wrong. Then I asked him what made him think that it was my birthday. He said last night when he went to the shop across our apartment and while returning, he saw the sign that said happy Birthday M in our apartment window. He assumed, the birthday must have been a few days ago as the sign was still there so thought of calling me and wishing a Happy birthday (really nice of him). When I heard that I couldn’t stop laughing but at the same time I was really embarrassed.

The thing is when I had my birthday party, 3 months ago, my husband decided to do this big decoration on our window. It was really nice of him as I had Halloween theme party and it looked amazing. He put lots of work to execute the design and decoration. I thinking I kept the decorations for a week before taking them out. The only thing I couldn’t take out was my birthday banner as it was too high up the window. I have asked him several times to take that out but for some reason, he hasn’t.  Also it hasn’t occurred to me lately, to remove it, even though I see it every day. I guess my eyes just filter it when I am home.

I had no idea that, people could see the banner from the street in the evening when we have our lights on. Now I am thinking how many of our neighbour has seen that banner and wondered what is going on with a birthday celebration for 3 months. How embarrassing!

His call made my morning but I have to go home tonight and make sure that banner gets off from the window. I think 3 months is a bit too long to have the banner hanging around isn’t it?

Just a day remaining before the weekend so enjoy everyone!!!