This is a ceremony where the newly wed bride is taken to the temple of the Kuladevata (family deity) where the bride is introduced to the god as a new member of the family and in front of the god, the groom puts Sindoor on the bride’s forehead and hair partition. 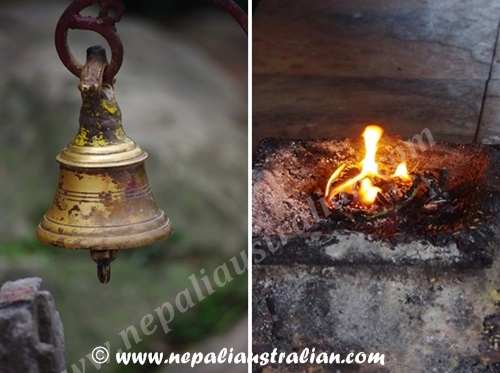 The very next morning after I came to AS’s house, we went for Wanjala. It was me, my MIL, AS’s aunts and AS. We drove to the temple and waited in the queue for the priest to be free. 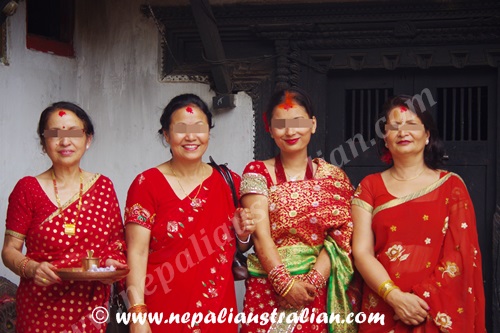 Once he was available, we handed him all the things for the Puja along with Sindoor from the Swayamvar ceremony. He performed some rituals and prayers and then asked AS to put Sindoor on my forehead. My MIL held a red and gold cloth from behind and, AS put the Sindoor on my forehead. Then I had to touch AS’s feet to get his blessing. 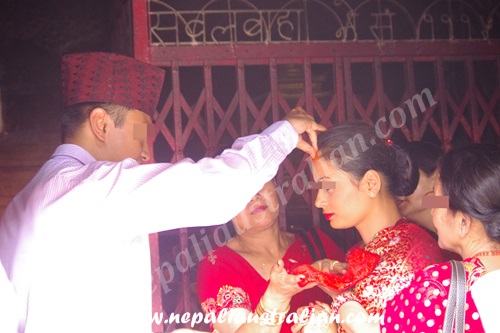 More on wedding on next post, till then, take care.

When we (me and AS) came to my parent’s home for the first time, all my relatives were waiting for us. It was exciting as it was the first time a son in law visits the house after the wedding. It is the ceremony where the, groom is introduced to the bride’s family members. The funny thing was he already knew all of them.

The preparation was all done before hand so we went straight to the room where Supari ceremony going to start. AS sat down alongside his brother and my aunt (the eldest member of the family) started the ritual. 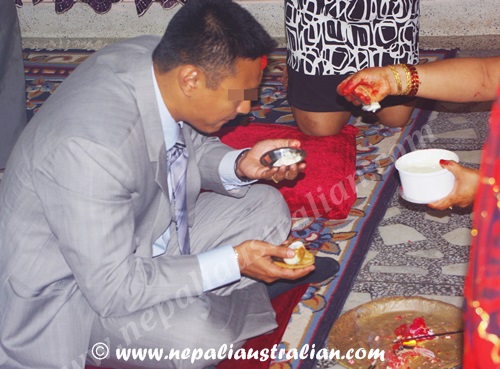 Like most ceremony, she put tika to Lord Ganesh and then to AS. Then AS gave supari to my parents and it return they gave him a suitcase which had a suit, a shirt, shoe, socks and perfume. Then Supari was given to rest of the family and my brother gave him a watch and other relatives gave him money.

As it was only close relatives it didn’t take long. After that we had dinner. It was fun to be back at my parents’ home.

The days following the wedding, AS and I had to visit all my close relatives. They performed simple puja and give him Sagun. It is called “Jwain Bhitraune” in their home. Normally this process takes many days as you go to various relatives one day at a time but we finished this process all in one day. We visited all my relatives and we had breakfast, snacks, lunch, dinner and more snacks in different relatives’ homes.

In Nepal, everyone loves to feed you and they don’t like an empty plate so by the end of that day we had so much Sagun and food that both of us were completely stuffed. My relatives also gave us some cloths as gifts.

Till then, take care.

Mukh Herne is the day when the bride’s family comes and meets the bride at the Groom’s place, with lots of gifts like jewellery, saris, cosmetic, shoes, bags, fruits, Nepali Rotis , Masala and much more.

Mukh Herne literally means “looking at the face” and traditionally it is done after the bride spends a few days with the groom’s family. All the bride’s relatives then visit the groom’s home so they can “look at the bride’s face” and see if she is happy and being treated well.

During this ceremony every member of the bride’s family gives her money or jewellery as Mukh Herne gift. The groom is not allowed to be present while this ceremony goes on.

Once I came to AS’s house I was looking forward to this day. I hadn’t seen my parents for four days so I was very excited when the day finally arrived. 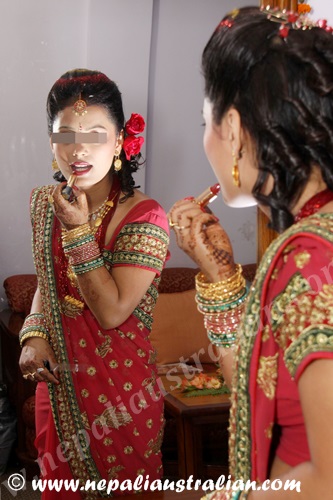 I woke up early, went to the beauty parlour and got ready to go to the venue. I was wearing a pink Sari with a green border (a gift from my mother in law) along with lots of accessories and bridal makeup.

It was so nice to see my family again, my dad was there with my brother, my sister-in-law, my uncles, aunts, cousins and close friends. According to the tradition, my mum hadn’t come. I wished she was there too.

They brought everything that was sent from AS’s family during Supari ceremony except perishable items and they had added more items so there were heaps of trays decorated nicely.

They also had a cake (the two tier with bride and groom topping), a decorated yogurt, Saris, bags, lots of Rotis and fruits. They also had decorated fish, and a coconut. 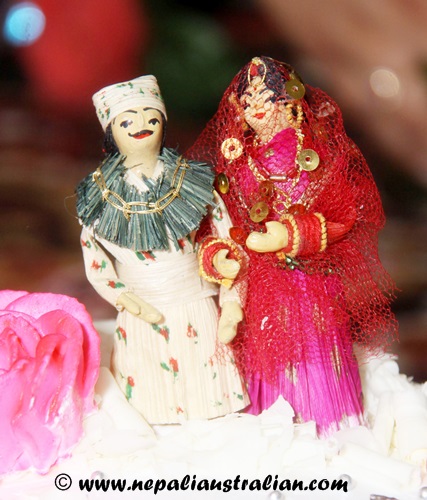 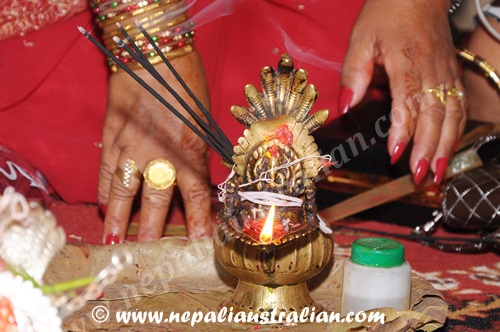 Then the ceremony started with Tika being put on my forehead by my uncle, the eldest male in the family. Then he handed me the red Dupatta Sari. I had to go and change into this new Sari for the remainder of the ceremony.

So I took my cousins and friends to help me change into the room next door. It was a big job as it was a Dupatta Sari and it takes an expert to get it right. On top of that my mum had forgotten to cut the blouse piece from the Sari so there were people running around looking for scissors. We didn’t mean to take long but it took us a while to get the scissors, cut the sari and for me to get ready after that. I was really grateful that my friends and cousins were there to help me.

Finally, wearing my new Sari, I came back to the event hall. There were more rituals to go through. The priest from my family was instructing my dad and uncle on what to do and they were following the rituals.

Then everyone who had come from my family came one by one and met me with gifts like jewellery and cash. It looks like the bride is the ultimate winner in a Nepali wedding. 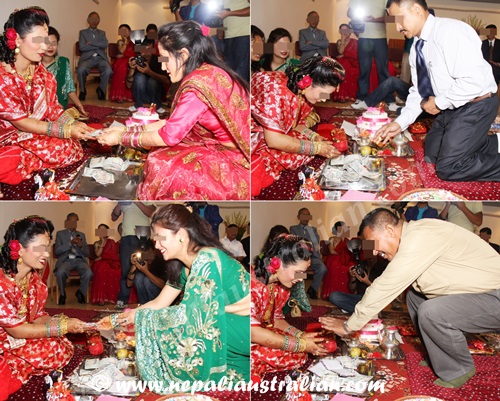 This process took a while but it was so fun. I received lots of gold and diamond jewellery, watch, sari and lots of cash. 🙂

Now it was my turn to cut the cake again. The cake was given to everyone and then it was time for dinner. On the way to the dinner hall everyone from my family side received Masala (a Sagun bag with lots of dried fruits and nuts).

After dinner, my family left and I was a bit sad. I knew I had a new home with AS and his family but I still missed my parents and the home where I had grown up.

Till then, take care.