I have a friend from school who used to be very close to me. We used to talk and share our dreams together. We used to have sleepover and share a close bond with each other’s families too.

When I came to Australia we used to talk often and kept in touch. Our friendship was really strong and my parents used to invite her for all the festivals even I was not in Nepal. I was there to support her and she was there to support me even when we were miles apart.

5 years ago she decided to come to Australia. I helped her in every possible way. She got a visa to come here and stayed with me. I was really happy to have my friend close to me again. It was going well until one day I found out that she was dating my friend, who I had introduced to her. I was a bit hurt as I would have wanted to hear that information from her but I heard it from a third-party. I didn’t say anything to her. I didn’t ask any questions but waited for her to be ready to talk to me.

From that time on even as we lived together, we hardly saw each other and had really no conversation with each other. I tried a few times to catch up with her but she seemed too busy with her boyfriend and his family. 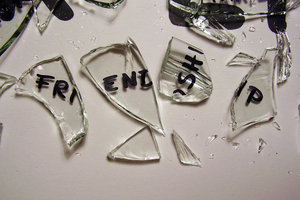 Six months went by and we went from good friends to just room mates. Then she told me that she was going to marry her boyfriend. I was really happy for them as I knew both of them well. I did my best to help her with her wedding but whatever I did didn’t mend the distance between us.

After the wedding she moved in with her new husband and we didn’t really keep in touch. I called her up a couple of times but I got the feeling that she didn’t want to talk so I stopped calling. I have no idea what happened between us but in this unknown way I lost a friend.

We still meet during functions organised by common friends but we just say hi and that is all. Last weekend when I went to one of the gatherings, one of my girlfriends informed me that she is expecting a baby. I was so happy to hear the news but I don’t know what I can do. I thought of calling her or writing her an email but I am scared.

What if she doesn’t response to my email?  or What if the phone conversation becomes awkward? are all the questions that are stopping me from reaching out to her.

I am not even sure she wants me to be a part of her life again.

Just confused on what I can do next.

Should I leave things as it is? Or Should I reach out to her?

Can anyone help? If you have been in a similar situation, what have you done?

P.S: I am writing my version of story as her version can be very different from this.